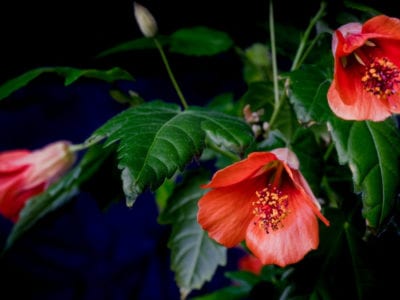 The common name for flowering maple houseplant refers to the similarly shaped leaf of the maple tree, however, Abutilon striatum is not actually related to the maple tree family. Flowering maple belongs to the mallow family (Malvaceae), which includes mallows, hollyhocks, cotton, hibiscus, okra, and rose of Sharon. Abutilon flowering maple is also sometimes referred to as the Indian mallow or parlor maple.

This plant is indigenous to southern Brazil and also commonly found throughout the South and Central Americas. Shrub-like in appearance, the flowering maple houseplant also has blooms similar in shape to hibiscus flowers. The flowering maple is striking enough to make a lovely specimen plant in the garden or in a container and will bloom from June through October.

As mentioned, the leaves of the houseplant resemble those of the maple and are either light green or often stippled with gold hues. This variegation is the result of a virus first noticed in 1868 and eventually coveted over the solid green tones of other flowering maples. Today the virus is known as AMV, or Abutilon Mosaic Virus, and transmitted through grafting, by seed, and via the Brazilian whitefly.

How to Care for Abutilon Flowering Maple

All the rage in the 19th century (hence the name parlor maple), Abutilon flowering maple is considered to be a bit of an old-fashioned houseplant. Still with its lovely bell-shaped leaves of salmon, red, white, or yellow, it makes for an interesting houseplant. So, the question is how to care for Abutilon.

Abutilon requirements indoors are as follows: Flowering maple houseplants should be placed in areas of full sun to very light shade in moist, well-draining soil medium. Light shade placement will prevent wilting during the hottest parts of the day.

The Abutilon flowering maple tends to get rangy; to prevent this, pinch the tops of the branches in the spring to encourage a more compact habit. Other Abutilon requirements indoors are to water well but avoid overwatering, especially in the winter when the plant is in a dormant phase.

Flowering maple may be used as a container patio plant during warm months and then brought in to overwinter as a houseplant. A fast grower in warm climates, the Abutilon flowering maple is generally hardy in USDA zones 8 and 9 and thrives in summer warmth outside and cooler temps of 50 to 54 degrees F. (10-12 C.) in winter.

To propagate flowering maple houseplants, use tip cuttings removed in the spring or grow hybrids like Souvenier de Bonn, a 3 to 4 foot (1 m.) specimen with peach blooms and speckled foliage; or Thompsonii, a 6 to 12 inch (15-31 cm.) plant again with peach flowers and variegated leaves, from seed.

As far as any flowering maple problems go, they have pretty much the usual culprits or issues that afflict other houseplants. Moving the plant flowering maple to another location may contribute to leaf drop, as it is sensitive to temperature fluxes.