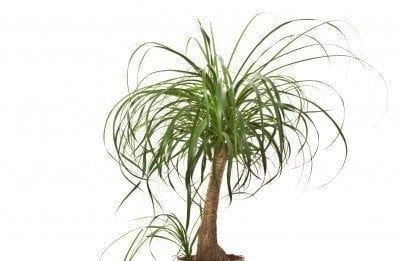 Ponytail palms are truly interesting houseplants with their spiky poof of slender leaves capping a decidedly elephant skin trunk. They are not true palms, however, so can you trim ponytail palms? Read on for the answer on how to prune ponytail palm and the chances it will come back from severe top damage.

Ponytail palms are inexpensive, fun little houseplants with slow growth and minimal care needs. Place the little plant in full sun and water sparingly and normally it will continue its tortoise-paced growth and give you no trouble. About the only problem with these plants is overwatering.

Can You Trim Ponytail Palm?

Let’s be clear on the difference between trimming and pruning. Trimming may be done with shears and generally refers to the removal of the tips of leaves. Pruning is done with the intention of removing base and woody material for plant rejuvenation, or restoration.

Ponytail palm is a single-stemmed plant, which means that if you want to prune any base or woody material, you would literally be removing the trunk. Cutting back ponytail palm is not an effective method of maintenance in that it would leave an open trunk and no greenery.

The action would expose the stem to mold and mildew and it would likely rot before it could ever start producing any more leaves or offsets. The plant doesn’t have stems so much, as simply the long strappy leaves that arch out from the slimmest part of the trunk.

Ponytail palm pruning is only used if you want to remove the pups for planting. This would be consistent with the definition of removal of base or woody material.

Pruning ponytail plants that are less than 6 inches (15 cm.) tall will result in the plant producing more heads. It only works on the very young plants and you should make slightly curved cuts into the main trunk to force growth.

Keep the plant in an arid region, without much humidity, to prevent the cut from rotting. Once it calluses, the plant will send out a shoot and eventually leaves to form another cap of foliage. Growers often create two- and three-headed plants in this manner, for larger ponytail palms with extra interest.

How to Prune a Ponytail Palm for Sucker Removal

The suckers are also known by the cuter name — pups. These grow at the base of the thick trunk snuggled up to the parent plant. Also called offsets, they should be divided from the main plant in spring and planted as separate, although cloned, plants.

The leaves grow in clumps with a base that attaches to the trunk. The clump is an offset or pup. Use a very sharp, clean knife or pruners for pruning ponytail palms and plant the pups immediately in gritty potting soil.

Printer Friendly Version
Read more about Ponytail Palms
<PreviousNext>
Did you find this helpful? Share it with your friends!
FacebookTweetPinEmail
Related Articles
Newest Articles
You might also like…
Additional Help & Information