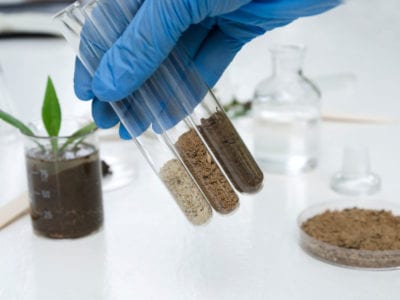 If you’re a new gardener (or even if you’ve been at it awhile), choosing soil for potted plants from the many types of potting soil available in garden centers can feel a bit overwhelming. However, once you have some knowledge of the basic components of potting soil and the most common potting soil ingredients, you can select the best product for your particular needs. Read on for helpful potting soil information.

Neither ingredient makes a good planting medium on its own, but the combination makes an effective all-purpose potting soil. Some products may also contain a small amount of limestone to balance soil pH.

Many standard soilless potting soils come with a time-release fertilizer pre-mixed. As a general rule, no additional fertilizer is needed for several weeks. Without fertilizer added, plants require fertilizer after four to six weeks.

Seed starting soil is much like regular soilless potting soil, but it has a finer texture and usually contains no pine bark. A lightweight, well-drained potting soil is critical for seeds to prevent damping off, a fungal disease that is usually deadly for seedlings.

You can purchase a variety of specialty potting soils (or make your own.) A few of the most common include: