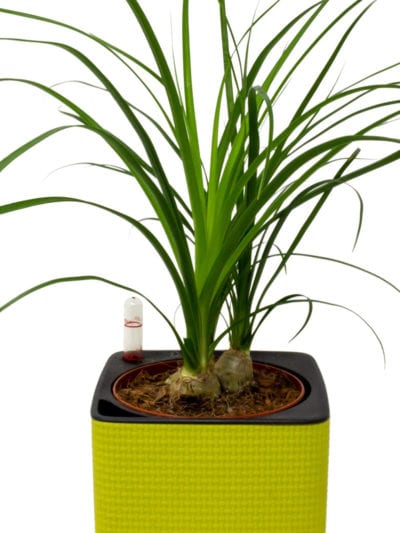 Ponytail palm plants are useful in the tropical to semi-tropical exterior landscape, or as a potted specimen for the home. The palms develop pups, or side shoots, as they mature. These smaller versions of the parent plant are easy to divide away from the mother palm. Propagating ponytail palm pups will give you new little palms to share with friends and family or just provide you with another source of this attractive, ornamental succulent.

Another name for this plant is the elephant’s foot palm due to its thick, roughly skinned trunk. It is in the same family as agave plants and native to southeastern scrub desserts of Mexico. It is not a true palm but a succulent, which saves moisture in the trunk.

In times of drought, the trunk will shrink in diameter and get slightly shriveled bark. When the rainy season arrives, it sucks up and stores as much moisture as it can and the trunk swells markedly.

It is not a hardy plant in cooler zones and can sustain damage to the roots and trunk in excessively wet soils. As a container plant, ponytail palm care is minimal and the plant thrives on long periods of neglect.

This lively, little plant produces side pups as a method of propagating itself. Once the palm has matured, it begins to grow smaller versions of itself that sprout from the base of the mother.

Removing pups from ponytail palms is the easiest way to grow more of the succulent palm. Ponytail palm shoots divide easily from the parent plant and then require rooting to produce viable plants.

Spring is the best time to divide ponytail palm shoots. Carefully excavate around the base of the parent plant to expose the base of the pups. Use a clean, sharp knife and cut the pup away from the adult plant. Pups that are 4 inches (10 cm.) tall are usually forming a root base and make the best starts.

Use a nearly soilless medium, such as a cactus mix or sand-based potting soil. Place the rooted end of the pup in a moistened medium in a well-draining container. Cover the container with a plastic bag lightly secured around the edges of the pot. Place the container in a warm room in moderate light. Every few days, uncover the pot and mist the surface of the soil.

Provided soil drainage is adequate and you do not overwater the palm, this plant is remarkably unfussy. The plant only needs water every two weeks or so and you can completely suspend watering in the winter months.

Cut off damaged or diseased foliage as it occurs and repot every 2 to 3 years.

Optimum temperatures for ponytail palm plants are 70 to 80 F. (21 to 27 C.), but they do quite well in average home interior temperatures.

Printer Friendly Version
Read more about Ponytail Palms
<PreviousNext>
Did you find this helpful? Share it with your friends!
FacebookTweetPinEmail
Related Articles
Newest Articles
You might also like…
Additional Help & Information