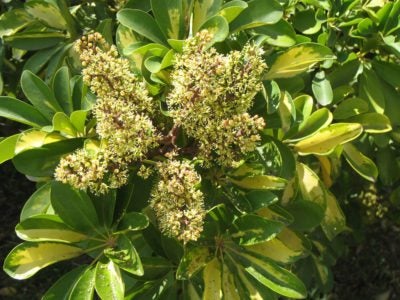 Schefflera is popular as a houseplant and is usually grown for its attractive foliage. Most people in temperate regions have never seen a schefflera blooming, and it would be easy to assume that the plant doesn’t produce flowers. Flowering schefflera plants may be unusual, but these plants do bloom once in a while, even when they’re grown indoors year-round.

When Does Schefflera Bloom?

Schefflera plants, which are commonly known as umbrella trees, are tropical. In the wild, they grow in tropical rainforests or in various parts of Australia and China, depending on the species. They certainly produce flowers in their native habitats, but you may be wondering: does schefflera bloom in cooler regions?

Schefflera plants are less likely to flower in temperate regions, but they do produce flowers occasionally, especially in warmer locations like Florida and southern California.

In gardening zones 10 and 11, Schefflera actinophylla can be planted outdoors in a full sun location, and these conditions seem to give the plant the best chance to flower. The schefflera blooms are most likely to appear in summer. Flowering is not reliable outside the tropics, so this likely won’t happen every year.

Schefflera arboricola has been known to bloom indoors. Giving the plant as much sunlight as possible may help encourage it to flower, and this species, too, is most likely to bloom in summer.

Depending on the species, schefflera blooms can be white, pink, or red. In Schefflera actinophylla, each inflorescence, or flower spike, is quite long and showy, with many small flowers emerging along its length. The inflorescences are grouped in clusters at the end of branches. These clusters have been described as looking like the tentacles of an upside-down octopus, which accounts for one of the plant’s common names, “octopus-tree.”

Schefflera arboricola produces more compact flowers on small inflorescences that look like small white spikes. Its flower spikes also grow in clusters that have a surprising appearance, especially on a plant that is so well known for its foliage.

When your schefflera plant flowers, it is definitely a special occasion. Be sure to take some photos before these schefflera blooms fade!

Printer Friendly Version
Read more about Schefflera Plants
<PreviousNext>
Did you find this helpful? Share it with your friends!
FacebookTweetPinEmail
Related Articles
Newest Articles
You might also like…
Additional Help & Information