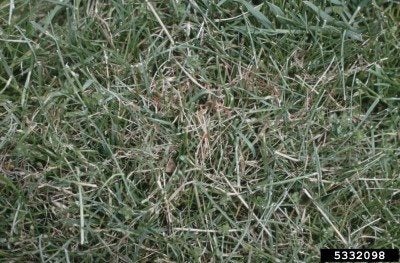 There are all kinds of diseases and pests that can adversely affect your turf grass. Soggy pink stuff in lawns or reddish grass are signs of a common turf disease. The effect is caused by one of two different fungi, which appear under very different conditions. For the most part, the question of how to get rid of pink fungus or red thread in grass is moot as it is caused by climate conditions. Controlling pink fungus on lawns requires cultural management and good quality sod care.

That pink stuff in lawns is Limonomyces roseipelli, a fungus that produces cotton candy like spores and pink gooey fungal growth. The affected grass blades may turn tan to pink in a circular pattern. The area may be 2 to 4 inches (5-10 cm.) in diameter.

Pink patch on grass is a slow growing fungus that doesn’t cause much harm. The problem could also be pink snow mold in grass, but this only appears after snow melts. It is also a fungus that survives dry periods as dormant mycelia and then blooms when cool, wet conditions arrive. This problem is less common and easily managed in established lawns that are well thatched.

Pink patch on grass was once thought to be the same as red thread but it is now known to be a different fungus. Red thread in grass is caused by Laetisaria fuciformis and appears as red strings in among the dying grass blades.

The condition arises in drier conditions than the pink patch disease and spreads more quickly with more detrimental results. Spring and fall are the most common periods to see this disease. Since this fungus thrives in moist, cool weather, it is not possible to completely control it, but careful cultivation practices can minimize damage and appearance.

How to Get Rid of Pink Fungus and Red Thread

Healthy vigorous grass is able to withstand minor disease and insect infestations. Before you ever lay sod, make sure the pH is between 6.5 and 7.0.

Water infrequently and deeply in the morning so grass blades have time to dry quickly. Let in plenty of light to your lawn area by keeping trees and plants pruned back. Aerate and thatch to improve air circulation and water movement.

Fertilize in spring with the proper amount of nitrogen, as both pink patch on grass and red thread thrives in nitrogen poor soils.

Controlling pink fungus in lawns and other turf diseases starts with these types of good cultivation practices. Fungicides are rarely necessary except in extreme cases and are not 100% effective in all infections.