Blackberry Lily
By: Becca Badgett, Co-author of How to Grow an EMERGENCY Garden
Printer Friendly Version 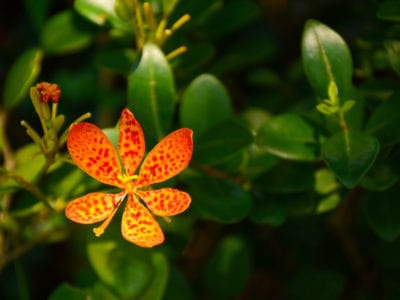 Growing blackberry lilies in the home garden is an easy way to add summer color. Grown from bulbs, the blackberry lily plant provides flowers with a showy, yet delicate appearance. Their background is a pale orange or a yellow color on the ‘flabellata.’ Petals are mottled with spots, giving them the sometimes common name of leopard flower or leopard lily.

Blackberry lily plant, Belamcanda chinensis, is the most commonly grown plant of the species, the only one cultivated. Belamcanda blackberry lilies are of the Iris family, and were recently renamed ‘Iris domestica.’

Flowers of Belamcanda blackberry lilies last just a day, but during the bloom season there are always more to replace them. Blooms are followed by a dry cluster of black fruits in autumn. Foliage is similar to the iris, reaching 1 to 3 feet tall (0.5 to 1 m.).

How to Grow a Blackberry Lily

Growing blackberry lilies begins with planting the bulbs (actually tubers). The blackberry lily plant can be planted at any time the ground is not frozen, in USDA hardiness zones 5 to 10a.

When learning how to grow a blackberry lily, plant in a sunny to lightly shaded area with well draining soil. The yellow flowering type, Belamcanda flabellata, needs more shade and more water. Rich soil is not a requirement for this plant.

Blackberry lily care is not complicated. Keep the soil moist. Try growing blackberry lilies with Asiatic and Oriental lilies, such as ‘Cancun’ and ‘Stargazer.’ Or plant them in mass for a sea of the delicate, mottled blooms.