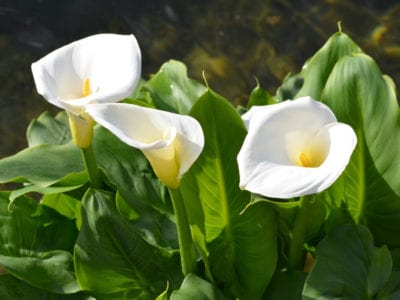 The elegant calla lily is one of the most recognized flowers in cultivation. There are many colors of calla lily, but the white is one of the most used and part of wedding celebrations and funerals alike. The long lasting flowers are a florist’s dream and potted miniature plants decorate homes across the world. There are few calla flower problems, but a common occurrence is the appearance of green flowers. This may be due to cultivation problems, lighting, or the age of the blooms.

Unless you are growing the ‘Green Goddess’ variety of calla, you might be surprised by green calla lily flowers. Calla lilies are not true lilies. They are in the same family as the Jack-in-the-pulpit. The flowers are not what they seem either. The flower’s petals are called the spathe. The spathes are modified leaf structures, which fold around the spadix. The spadix bears the tiny true flowers.

Green spathes are often the result of low light situations. Calla flower problems can also arise from excess nitrogen. Flowering plants need balanced fertilizers or ones that are slightly higher in phosphorus. High levels of nitrogen can retard the formation of blooms and cause green calla lily flowers.

It is completely normal to have green spathes on some varieties of young calla plants. The buds start out green or streaked with green and turn color as they open and mature. This natural occurrence is not considered among the calla flower problems, as it will fix itself in time.

Plant callas in bright sunlight where soils are well drained. Plants in dim light may have difficulty coloring and stay greenish.

Provide supplemental irrigation during flowering periods to promote healthy plants. Callas are originally from Africa and require hot temperatures to promote flowering. They bloom the most in temperatures from 75 to 80 degrees F. (24-27 C.). In proper conditions, calla lilies will bloom all summer long, with flowers lasting for up to a month on the plant.

Why are Calla Flowers Turning Green?

The reversion of already colored calla flowers leads the gardener to wonder, “Why are calla flowers turning green?” The plant is perennial in many zones and enters a dormancy period when fall approaches. This causes the long-lived blooms to change color, often to green and then brown. Calla lilies with green blooms are a normal part of the mature plant’s life cycle.

The plant begins to focus energy on its leaves, which are gathering energy to fuel the next season’s bloom. When the flowers are limp and green, cut them off so the plant can use all its resources on fueling the rhizomes. Dig up the rhizomes in cold zones and store them in a vented bag nestled in peat or sphagnum moss. Replant the rhizomes in early spring when soils are workable.

Printer Friendly Version
Read more about Calla Lilies
<PreviousNext>
Did you find this helpful? Share it with your friends!
FacebookTweetPinEmail
Related Articles
Newest Articles
You might also like…
Additional Help & Information