Crinum Lilies
By: Becca Badgett, Co-author of How to Grow an EMERGENCY Garden
Printer Friendly Version 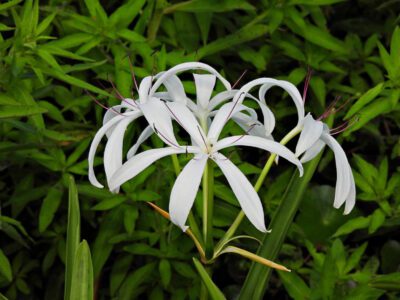 Crinum lilies (Crinum spp.) are large, heat and moisture loving plants, producing an abundant array of showy flowers in summer. Grown in gardens of southern plantations; many still exist in those areas, overtaken by swamps and bogs. The crinum plant is often referred to as the southern swamp lily, spider lily, or as a cemetery plant, indicating it was often used to adorn graveyards of centuries past.

Regaining popularity in the landscape, crinum is usually started from large bulbs, although growing plants can be found in nurseries as well. The crinum plant can also be grown from the large seeds it produces or by offsets called pups.

The crinum plant reaches 3 to 5 feet (1-1.5 m.) at maturity and the same around. Foliage is spirally arranged, coarse, and open. It is often used for a short, growing hedge where blooms and fragrance can be enjoyed. Locate crinum lilies in groups, spacing plants 4 to 6 feet (1-2 m.) apart. The coarse, draping foliage may appear unkempt, at which time the crinum plant can be trimmed, removing bottom leaves for a tidier appearance.

How to Grow Crinum Lilies

Plant the large bulbs in full sun or filtered light in early spring. As moisture helps this large plant become established, a few water retention pellets in the soil are useful when planting crinum lilies. A mound of soil around outer edges of the crinum plant helps in directing water to the roots. Bulbs should not sit in water, soil should drain well.

Crinum flowers appear in late summer, offering fragrance and large, showy blooms. They are available in a range of cultivars such as pink striped ‘Milk and Wine,’ and the white flowering ‘Alba.’

Most information indicates the crinum plant is limited to USDA plant hardiness zones 9 through 11, where they function as evergreen perennials with long lasting flowers. However, the resilient crinum lily bulbs are known to exist and keep blooming for decades as far north as zone 7. The crinum plant performs as an herbaceous perennial in colder areas, dying to the ground in winter and shooting up with the daffodils and tulips in spring.

Though drought resistant in times of necessity, the crinum lily prefers consistently moist soil unless dormant. Plant a few of the large crinum lily bulbs for showy masses of flowers and fragrance in the landscape.