No Flowers On Dahlia Plants: Why Won’t My Dahlias Bloom 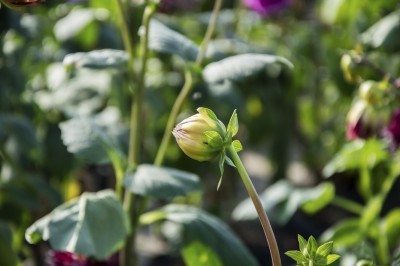 Why won’t my dahlias bloom? It can be a problem for a lot of gardeners. Your plants may be spindly or lush, but there are no flowers in sight. It’s not uncommon, and there are a few things that might cause it. Keep reading to learn what causes no flowers on dahlia plants, and how to go about getting dahlias to bloom.

Why Won’t My Dahlias Bloom?

Getting dahlias to bloom may be as simple as getting their light and water requirements down. Dahlias bloom best in full sun, meaning at least six hours of direct sunlight every day. Even a little less than that means your dahlias produce only some flowers. Partial or more shade will probably mean your dahlias do not bloom at all.

Water is another major cause of dahlias not flowering. If they don’t get enough water, dahlias do not bloom. If the soil around your dahlia is dry, moisten it to a depth of 1 inch (2.5 cm). Keep it from drying out between waterings by adding mulch.

A common mistake that results in dahlias not flowering is over-fertilizing. Sometimes fertilizer is too much of a good thing, and lots of nitrogen will make for plenty of lush, green stems but few or no flowers. Feed your dahlias with fertilizer with little or no nitrogen– you’re not growing it for the leaves.

If your dahlia produced some flowers but isn’t blooming anymore, or the buds don’t open, it might be because you’re not deadheading it. If you leave the blossoms where they die, the plant focuses its energy on producing seeds. If you remove the dead flowers, the plant didn’t get its seeds and will try again by growing more flowers. If you keep deadheading, you can keep it blooming all season.