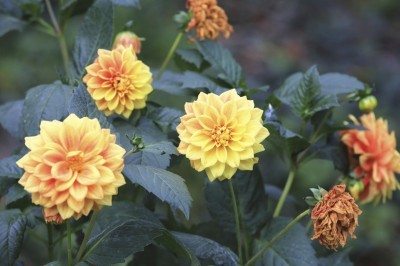 Dahlias are true summertime standouts in the landscape. The sheer array of size, color and form make these wonderful tubers a garden favorite, both easy to grow and multiplying over time. Dahlias are most commonly started from tubers, but you can collect seed and increase your favorite flowers over time. You will need a little patience though, as dahlia flower seeds take several seasons to produce blooms, but the effort is fun and can yield some surprising results from these naturally hybridizing plants.

Dahlia tubers are common in nurseries and seed catalogs. They are the fastest and most reliable way to grow big, boisterous blooms. Growing the flowers using dahlia seed vs. bulbs may take a little more time but is a great way to extend your crop of the dazzlers. Knowing how to plant dahlia seeds isn’t hard, but there are a few tips for guaranteed success and riots of colorful blooms. Save your seed for inexpensive consistent dahlia season after season.

Dahlias most accurately grow from tubers which, like bulbs, are underground storage organs containing the DNA or blueprint of the plant. Vegetative methods of propagation result in true copies of the parent plant while seeded propagation is prey to the capriciousness of nature and may result in slightly different versions of the parent. For this reason, starting dahlia seeds is not a method favored by collectors and champion breeders. You just never know what you are going to get.

Dahlia flower seeds are produced in prolific amounts on the plants, but most gardeners simply protect the tubers and replant them the next year as a surefire way to keep a favored species. However, the adventurous gardener may want to save some of that seed and see what the next season brings. It might be a bloom that surpasses its parent in beauty and form.

How to Plant Dahlia Seeds

It can take a full season for you to see flowers on your seeded dahlias. Do dahlia seeds turn into tubers? In the first year, slender tubers will form but they will not be anything worth harvesting and will need another year or two to develop good growth nodes and produce bodacious plants.

The first step to starting dahlia seeds is harvesting ripe, ready pods. Pods contain numerous seeds. Wait until the flower has dropped all its ray petals and the pod is a light tan-green color. The seeds inside should be ripe and gray to dark brown.

Cut the pod off and let it dry to facilitate removal of the seeds. Separate the seed from the rest of the pod and allow let dry before storing. In early spring, germinate the seeds in soilless seed starting mixture in flats.

Sow your seeds an inch (2.5 cm.) apart on the surface of the mixture and cover lightly with a dusting of the medium. Moisten the medium and keep moderately damp, moving the flats to a warm location of at least 70 degrees F. (21 C.). Germination will occur in 7 to 12 days after sowing.

Once the seedlings are large enough that their leaves are touching, individually pot them up in 3-inch (7.5 cm.) containers. Harden the seedlings off before planting them out into prepared garden beds. Wait to plant them outdoors until all danger of frost has passed.

Alternatively, you can plant them outdoors a week before the date of the last frost. In northern climates this may not give the plants enough time to develop and bloom. It works great in long season areas, however. If cold temperatures threaten at the end of summer, repot the plants and move them into a greenhouse or indoors.

They won’t have much tuber development, and the best way to save them for next season is to let them go dormant indoors where icy temperatures can’t damage the tiny root and tuber system. Harden them off the next season and plant outdoors. You will get big beautiful plants with plenty of appealing flowers that will set pods and start the whole growing dahlia seeds process over anew.