Rust On Daylily Plants: Learn How To Treat Daylily Rust

Daylilies
By: Becca Badgett, Co-author of How to Grow an EMERGENCY Garden
Printer Friendly Version 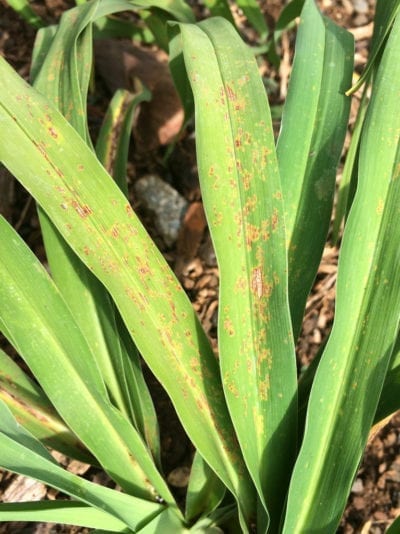 For those who’ve been told that the daylily is a pest-free specimen and the easiest flower to grow, finding daylilies with rust can be disappointing. However, using the right horticulture practices and choosing from many non-susceptible cultivars can help ensure a disease-free lily bed.

Daylily rust (Puccinia hemerocallidis) first appeared on select plants of the species in 2000 here in the U.S. By 2004, this affected half of the country. It has become a concern for many garden clubs who regularly sell and trade the plants, and promote them as pest and disease-free. Their advice is that selling plants with “no earth/no scapes” will prevent the spread.

Today, info suggests some have managed to avoid rust by planting certain daylily types and others have learned to effectively treat rust on daylily plants.

Rust does not normally kill the daylily but it does affect how the plant looks in the garden and can spread to other plants. Rusty-colored pustules appear on the underside of leaves. This is how you can tell the difference between rust and a similar fungal disease called daylily leaf streak. No pustules exist with the leaf streak fungus, just microscopic, small, white spots.

How to Treat Daylily Rust

Rust on daylily plants dies off in the coldest winter temps. Daylily rust symptoms disappear in USDA hardiness zones 6 and below, so rust is more of an issue in southern areas. Cultural practices help avoid the development of rust spores, which require high humidity to develop to the stage of infection.

Temperatures must be between 40- and 90-degrees F. (4-32 C.) for five to six hours for this development and the leaf must remain wet. Avoid overhead watering of your daylily beds to help prevent this disease. Water at the soil level for these plants and others when possible to avoid many fungal issues like this.

Rust on daylilies normally occurs on older foliage that should be removed and disposed of. Clean pruners between cuts with an alcohol wipe to avoid spreading the disease.

Printer Friendly Version
Read more about Daylilies
<PreviousNext>
Did you find this helpful? Share it with your friends!
FacebookTweetPinEmail
Related Articles
Newest Articles
You might also like…
Additional Help & Information