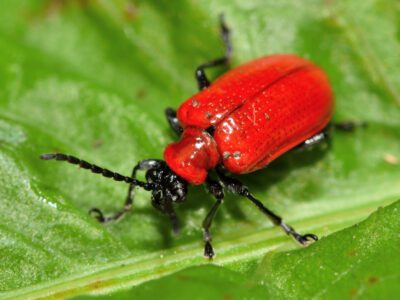 Lily leaf beetles can be found feeding on a variety of plants, including potatoes, Nicotiana, Solomon’s seal, bittersweet and a few others, but they only lay their eggs on true lilies and fritillarias. When you find your plants have been afflicted by a lily beetle infestation, it can leave you feeling frustrated. To relieve the stress associated with these little buggers, you should become familiar with the best practices for prevention and lily beetle treatment. Read on for more information.

Information About the Lily Leaf Beetle

The lily leaf beetle was imported from Europe, probably on shipments of bulbs making its way to North America around 1945. Discovered in Montreal, the red lily beetles were confined to the surrounding area for years. Then in 1992, these Asiatic lily bugs were found in Boston and the infestation now covers all of the New England states. Although it is most frequently found in the northeast, infestations are spreading south and west. It’s theorized that most of the spread is due to the sharing of plants and bulbs among gardeners.

The adult lily leaf beetle is a beautiful insect with a bright scarlet body with a black head, antennae, and legs. These ½-inch (1 cm.) long beetles are good hiders and strong fliers. The red lily beetles emerge from the ground in the early spring around mid April. After mating, the female lays her reddish brown eggs in an irregular row along the underside of the leaves of young lily plants. One female lily leaf beetle can lay up to 450 eggs over the course of a season.

Hatching in a week to ten days, the larvae cause much more damage than the adult red lily beetles, chewing from the underside of leaves and sometimes stripping the plant. The larvae resemble slugs, with swollen orange, brown, yellowish, or greenish bodies that are distinctive in that they carry their excrement on their backs.

The larvae feed for 16 to 24 days and then enter the ground to pupate. Lily beetle’s pupae are fluorescent orange. In 16 to 22 days, the new Asiatic lily beetles emerge and feed until winter, when they bury themselves in the soil until the cycle begins again.

Lily beetle control consists of hand picking and treatment with insecticides when manual removal isn’t enough. Some beneficial insects show promise in controlling these insects, but they are not yet available to home gardeners.

You can control small numbers of beetles by picking off the adults and removing the leaves where the females have laid their eggs. Knock the beetles into a bucket of soapy water and then bag and discard them. If the infestation is greater, more drastic measures are needed.

You may need to use insecticides to control a severe lily beetle infestation. Neem oil is a relatively safe insecticide that kills young larvae and repels adult lily beetles but must be applied at five day intervals for full effect.

Carbyl (Sevin) and malathion are both effective, killing adults and larvae in all stages, but also kills bees and other beneficial insects. The insecticide imidacloprid is most effective and can be found in several formulas, including soil drenches and foliar sprays.

Always try the least toxic option first to maintain the balance of beneficial insects in the garden. Whatever you choose, read the label carefully and follow instructions.

Preventing lily beetles begins with inspecting plants carefully before you bring them home. Never buy plants with holes in the foliage or ragged edges on the leaves. Check the undersides of leaves for young larvae and egg masses.

The beetles overwinter in the soil and on debris left in the garden at the end of the season. Cleaning up plant debris may reduce infestations the following year, however, the insects can travel a good distance from their overwintering site.

If you live in the New England area, be careful when sharing your bulbs and plants with others. Check the soil, or better yet, use packaged soil to pot your gifts to friends and neighbors. If there are no signs of these bugs currently in your garden, don’t accept gifts from others who have found them. With conscientious care, these little red devils can be controlled.

Printer Friendly Version
Read more about Lilies
Next>
Did you find this helpful? Share it with your friends!
FacebookTweetPinEmail
Related Articles
Newest Articles
You might also like…
Additional Help & Information