Pruning Peruvian Lilies: How And When To Prune Alstroemeria Flowers 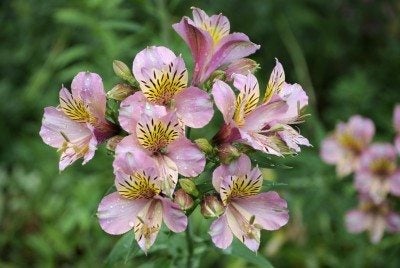 Any fan of cut flowers will instantly recognize Alstroemeria blooms, but these spectacular long-lived flowers are also excellent plants for the garden. Alstroemeria plants, aka Peruvian lilies, grow from tuberous rhizomes. The plants benefit from deadheading, but you may also want to try pruning Peruvian lilies to create shorter, less leggy stems. Be cautious, however, as improperly cutting Alstroemeria plants can diminish blooming and kill the vegetative stems. When to prune Alstoremeria flowers is also an important consideration in order to promote beautiful, bountiful plants.

Should You Cut Back Alstroemeria?

Only a few cultivars of Peruvian lily are hardy to USDA zone 4. The majority of the species will be treated as annuals in zones under USDA 6 or should be potted up and moved indoors for winter.

They will remain green in warm climates until the bloom period, so there is no reason to cut them back like you would with many perennials. Cutting Alstroemeria plants to the ground is not recommended, as it will stunt the vegetative growth and diminish blooms the next season.

Deadheading most flowering plants is a common practice and enhances the beauty and blooming. Many plants also benefit from pruning, pinching, and thinning for thicker stems and more branching. Should you cut back Alstroemeria?

Alstroemerias have both flowering and vegetative stems. The plant is a monocot and stems form with one cotyledon, which basically means pinching won’t force branching. Plants don’t need to be cut back either, but they respond well to deadheading and can be kept shorter if a few flower stems and seed pods are pruned off.

Pruning Peruvian lilies that are spent will keep the plant tidy and prevent the formation of seed heads. Deadheading can be done with shears but simply cutting off the “head” has been shown to weaken the next season’s display. A better method of deadheading involves no tools and will promote better blooms the following year.

Simply grasp the dead flower stem and pull the entire stem out from the base of the plant. Ideally, a bit of root should come attached to the stem. Be careful not to pull out the rhizomes. This practice is common with commercial growers and encourages more blooms. If you are shy about deadheading Alstroemeria by pulling the stem, you can also cut the dead stalk back to the base of the plant.

When to Prune Alstroemeria Flowers

Pruning out dead stems can be done at any time. The majority of pruning will be done when flower stems are spent. An interesting effect of the hand-pulling method is that it also essentially divides the plant, so you won’t have to dig it up.

Alstroemeria should be divided every second or third year or when the foliage becomes sparse and spindly. You can also dig the plant up at the end of the season. North Carolina State University recommends pruning back the plant one to two weeks before division.

Prune or pull out all but the youngest six to eight shoots of vegetative growth. You will need to dig 12 to 14 inches (31-36 cm.) down to get all the rhizomes. Rinse off the dirt and expose the individual rhizomes. Separate each rhizome with a healthy shoot and pot up individually. Ta da, you have a new batch of these beautiful flowers.