What Is The Agave Snout Weevil: Tips On Controlling Snout Nosed Weevils On Agave 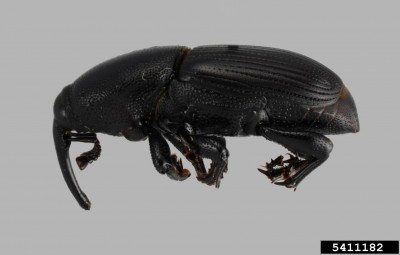 Succulent and southern gardeners will recognize the damage of the agave snout weevil. What is the agave snout weevil? This pest is a double-edged sword, doing damage to agave and other plants in both its beetle and larval form. Damage occurs quickly, followed by death because the bite of the weevil deposits bacteria that literally rot the agave. As the tissues soften and decay, the parent and its progeny are merrily munching away on your plant.

Snout weevil control is essential in southwestern areas, especially where agave is grown to make tequila. A population of agave snout weevils can decimate the agave crop and then what will we put in margaritas?

What is the Agave Snout Weevil?

The weevil is a form of beetle and grows approximately an inch (2.5 cm.) long. It is a black insect with the scientific name Scyphophorus acupuntatus. The insects usually choose unhealthy or old agaves to deposit their eggs.

Once an agave has bloomed, it is at the end of its life cycle and these plants are especially prone to agave snout weevil infestations. The bite of the beetle injects bacteria which cause the plant tissues to soften and liquefy. This makes it easier for the larvae and parents to eat the tissues, but it will eventually cause the collapse of even the most mighty of agave. Snout weevil damage is extensive and soon leads to the death of the plant.

The agave is a succulent plant also known as the Century plant. This is due to the bloom habit of the plant. It blooms only once in its life and then dies, and it can take years for the plant to produce that one flower.

The adult weevil bites the heart of the agave and lays its eggs there. When the larvae hatch, they spread bacteria and do physical damage as they chew further into the core of the plant. The larvae are the same ones you find in a tequila bottle and they busily chew until they have disconnected the interior tissue that connected the leaves to the crown. One day it will look fine, the next day the plant is wilted and the stiff, rapier-sharp leaves are flat to the ground.

The foliage will pull easily out of the crown and the center of the rosette is mushy and foul-smelling. By the time this happens, snout weevil control is pointless for that plant, but if you have other succulents and agave, there are steps you can take to protect them.

Agave snout weevil treatment is widely available in Arizona, New Mexico, and zones where the plants are grown outdoors. The indoor agave gardener may have to look a little harder for products that will work against the weevils.

Triazanon is available at most nursery and garden centers. Apply the granular form and dig it into the soil around the agave. When you water, the chemical will slowly release down to the roots of the plant and then into the vascular tissue, protecting it from the pest. Apply this snout weevil control once per month during the growing season.

Agave snout weevil treatment with sprays is tricky because the insect is protected by the thick leaves. If your agave has already succumbed, replace it with a resistant variety so you don’t have to go through the trauma of losing a favorite plant again.