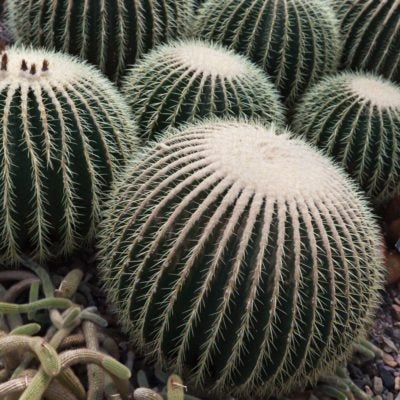 Fascinating and easy to care for, barrel cactus plants (Ferocactus and Echinocactus) are quickly recognized by their barrel or cylindrical shape, prominent ribs, showy blooms and fierce spines. A wide range of barrel cactus varieties are found in the gravelly slopes and canyons of the Southwestern United States and much of Mexico. Read on and learn about a few of the most popular barrel cactus varieties.

Barrel cactus varieties share much in common. Flowers, which appear at or near the top of the stems between May and June, may be various shades of yellow or red, depending on the species. Flowers are followed by elongated, bright yellow or off-white fruits that retain the dried blooms.

The stout, straight or curved spines may be yellow, gray, pinkish, bright red, brown or white. The tops of barrel cactus plants are often covered with cream- or wheat-colored hair, especially on older plants.

Most barrel cactus varieties are suitable for growing in the warm environment of USDA plant hardiness zones 9 and above, although some tolerate slightly cooler temperatures. Don’t worry if your climate is too chilly; barrel cacti make attractive indoor plants in cooler climates.

Here are some of the more common kinds of barrel cactus and their attributes:

Golden barrel (Echinocactus grusonii) is an attractive bright green cactus covered with lemon-yellow flowers and golden yellow spines that lend the plant its name. Golden barrel cactus is also known as golden ball or mother-in-law cushion. Although it is widely cultivated in nurseries, golden barrel is endangered in its natural environment.

California barrel (Ferocactus cylindraceus), also known as desert barrel or miner’s compass, is a tall variety that displays yellow blooms, bright yellow fruit, and closely-spaced downward-curved spines that may be yellow, deep red or off-white. California barrel cactus, found in California, Nevada, Utah, Arizona and Mexico, enjoys a much larger territory than any other variety.

Fishhook cactus (Ferocactus wislizenii) is also known as Arizona barrel cactus, candy barrel cactus or Southwestern barrel cactus. Although the clusters of curved white, gray or brown, fishhook-like spines are rather dull, the reddish-orange or yellow flowers are more colorful. This tall cactus often leans to the south so much that mature plants may eventually tip over.

Printer Friendly Version
Read more about Barrel Cactus
<PreviousNext>
Did you find this helpful? Share it with your friends!
FacebookTweetPinEmail
Related Articles
Newest Articles
You might also like…
Additional Help & Information