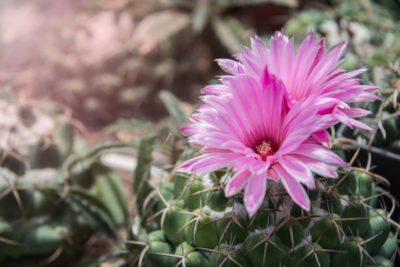 One of the sweetest and most charming cactus varieties are the Mammillaria. This family of plants is generally small, clustered, and widely found as houseplants. Most types of Mammillaria are native to Mexico and the name comes from the Latin “nipple,” referring to the standard appearance of most of the plants. Mammillaria are popular plants and common in many nursery centers with ease of care and propagation counted as some of their more appealing features. Read on for more Mammillaria information and descriptions of some of the more interesting plants in the family.

Mammillaria cactus varieties can span sizes from one inch in diameter (2.5 cm.) to one foot in height (31 cm.). The majority of the readily available species are the ground hugging variety. As interior plants, growing Mammillaria couldn’t be easier. They need well-draining soil, good light, and warm temperatures.

There are over 300 species of Mammillaria, but most you won’t see in the nursery. The tried-and-true varieties that thrive as houseplants are the easiest to find and provide a glimpse into the Mexican desert.

Mammillaria need a cooling period to promote blooming. Flowers are funnel shaped in colors of yellow, pink, red, green, and white. The family name stems from the nipple-shaped tubercles which are spirally arranged. The areoles, from which spines grow, can produce hair like or wooly spines that are either stiff or soft and in a range of colors. The arrangement of spines per species gives a wide variety of appearances as do the many flower colors produced by the plants.

Mammillaria cactus plants bear spines that are arranged according to the Fibonacci sequence, which states that each lower row of tubercles equals the sum of the previous two rows. This rule gives the plants an orderly patterned appearance when viewed from above.

Culture can vary a bit for some Mammillaria species due to differences in their native range. However, most require a small well-draining shallow container, cactus mix, or a blend of potting soil and sand, and moderately dry soil except during the growing season.

The light should be bright but not of the hottest, searing rays of midday.

Supplemental fertilizing is not necessary, but some cactus food applied in spring when active growth resumes can help produce healthier plants.

These are easy plants to propagate from seed or by dividing offsets. The most common issues are the result of excess moisture and can cause rot. Mealybugs and scale may be irritating pests.

Mammillaria cactus plants have many colorful names which are descriptive of their appearance. One of the cutest types of Mammillaria it the Powder Puff cactus. It has the appearance of soft, fluffy hair adorning the small body but be wary – that stuff will get into skin and leave painful impressions.

Similarly, the Feather cactus has a whitish gray, soft cloud of spines that grows a thick cluster of offsets. There are several species of plant called the Pincushion cactus. These produce either flat, cylindrical, or conical tubercles, depending upon species.

Some of the other interesting common names in the family are:

Printer Friendly Version
Read more about Mammillaria
Next>
Did you find this helpful? Share it with your friends!
FacebookTweetPinEmail
Related Articles
Newest Articles
You might also like…
Additional Help & Information