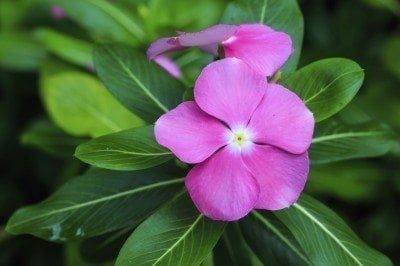 Madagascar or rosy periwinkle plant (Catharantus roseus) is a spectacular plant used as a groundcover or trailing accent. Previously known as Vinca rosea, this species does not have the hardiness its look-alike cousin, Vinca minor, has attained. The rosy periwinkle plant is tolerant of many growing conditions where seasons are warm annually and soil is well draining. Some notes about rosy periwinkle and how and where to grow Madagascar periwinkles can be found in this article.

Where to Grow Madagascar Periwinkles

Starry flowers, glossy leaves, and persistent fruits characterize the rosy periwinkle plant. It is a perennial in its native region of Madagascar and in tropical to semi-tropical regions. The flowers may be found in white, pink, and rosy-purple. It’s a plant that’s easy to care for, and may grow as a perennial or an annual in cooler zones.

The hardiness range is only USDA plant hardiness zones 9b to 11 as a perennial. However, you can use the plant for summer interest as an annual. Zones 7 and 8 should wait to install the plants outdoors until late May or preferably early June. The native habitat is located off the coast of South Africa and is semi-arid, hot, and sunny year-round.

Due to the plant’s adaptive nature, growing Madagascar rosy periwinkle in wetter, temperate zones is possible. It will succumb when freezing temperatures arrive, but generally blooms prolifically until that time.

Rosy periwinkle self-seeds, but the most common method of establishment is through cuttings. In the warmer climates, it grows rapidly to a height of up to 2 feet (61 cm.) and a similar spread. Seeds germinate at 70 to 75 degrees F. (21-23 C.) in around one week.

Care should be exercised to ensure a dry garden bed. It is even useful to plant periwinkle in a raised bed or one amended heavily with sand or other grit. Rosy periwinkle plants are extremely affected by heavy rains or excess irrigation and may develop root rot in such situations. Growing rosy periwinkle in temperate zones usually results in a short season annual with three months of lovely flowers before a glut of moisture ends its life.

The biggest issue with Madagascar periwinkle care is overwatering. Apply infrequent supplemental water in only the hottest and driest periods. In temperate zones, water the plants only until established and then rarely.

The plant thrives in ideal zones, in either partial shade or partial sun. The key is heat and dryness for a healthy, rosy periwinkle. It actually produces the best and most prolific flowers in poor soil, and excessively fertile soils can adversely affect the number of blooms. For this reason, it’s not necessary to feed the plants except at emergence and installation.

Pinch off new stems to promote a bushier plant. You can prune back the woody stems after the season has ended to improve the appearance and promote flowering.

This easy to care for plant will astound you with season long drama in proper environmental regions or a few months of fun in cooler zones. Either way, it is a worthy addition to most landscapes for any duration.

Printer Friendly Version
Read more about Annual Vinca
Next>
Did you find this helpful? Share it with your friends!
FacebookTweetPinEmail
Related Articles
Newest Articles
You might also like…
Additional Help & Information