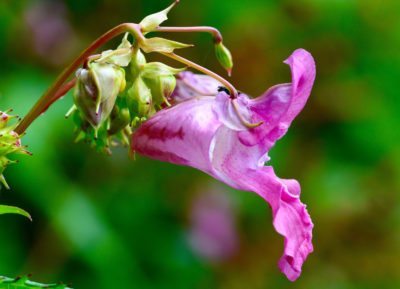 Himalayan balsam (Impatiens glandulifera) is a very attractive but problematic plant, especially in the British Isles. While it comes from Asia, it has spread into other habitats, where it pushes out native plants and can wreak serious havoc on the environment. Keep reading to learn more about how to control Himalayan balsam plants.

Himalayan balsam plants are native to Asia. In the early 19th century, they were brought to the British Isles to be planted in gardens, and before long they escaped into the wild, where they continue to cause a number of serious problems.

The plant is attracted to damp areas like riverbanks, where it grows in clusters that can reach 10 feet (3 m.) in height. Since it is so tall, it will often shade out shorter native plants. Himalayan balsam is an annual, however, and it dies back in the winter, leaving bare spaces that would normally be inhabited by native grasses. This leaves the riverbanks vulnerable to serious erosion.

It is also a vigorous producer of nectar, which draws pollinators away from native plants, putting their pollination and reproduction in jeopardy. It should not be planted, and Himalayan balsam control should be implemented if you find it on your property.

How to Control Himalayan Balsam

Controlling Himalayan balsam is a two-part endeavor – removing existing plants and preventing the spread of seed.

Like other balsam flowers, the plant reproduces by seed, and it will put out up to 800 of them every year. These seeds can travel a short distance through the air or miles and miles if they get caught up in a river or stream. It’s important to time your Himalayan balsam control so you don’t inadvertently spread more seeds. The best time is early to midsummer, before the seeds have matured.

The most effective method of controlling Himalayan balsam is cutting and hand pulling. If you’re getting rid of Himalayan balsam plants by hand, let the cut plants lie on the ground in the sun for a few days to dry out and die before composting them.

Herbicides also work but only as a last resort.