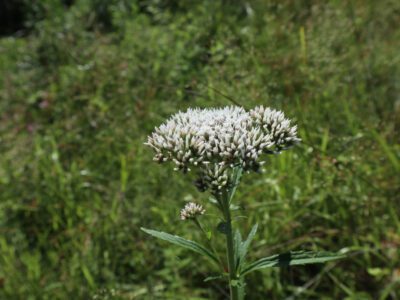 Boneset is a plant native to the wetlands of North America that has a long medicinal history and an attractive, distinctive appearance. While it is still sometimes grown and foraged for its healing properties, it may also appeal to American gardeners as a native plant that attracts pollinators. But exactly what is boneset? Keep reading to learn more about how to grow boneset and common boneset plant uses.

Boneset (Eupatorium perfoliatum) goes by several other names, including agueweed, feverwort, and sweating plant. As you may guess from the names, this plant has a history of being used medicinally. In fact, it gets its primary name because it was used to be used to treat dengue, or “breakbone,” fever. It was frequently used as a medicine by Native Americans and by early European settlers, who took the herb back to Europe where it was used to treat the flu.

Boneset is an herbaceous perennial that is hardy all the way down to USDA zone 3. It has an upright growing pattern, usually reaching about 4 feet (1.2 m.) in height. Its leaves are hard to miss, as they grow on opposite sides of the stem and connect at the base, which creates the illusion that the stem grows up out of the center of the leaves. The flowers are small, white, and tubular, and appear in flat clusters at the tops of the stems in late summer.

How to Grow Boneset

Growing boneset plants is relatively easy. The plants grow naturally in wetlands and along the banks of streams, and they perform well even in very wet soil.

They like partial to full sun and make great additions to the woodland garden. In fact, this relative of joe-pye weed shares many of the same rowing conditions. The plants can be grown from seed, but they won’t produce flowers for two to three years.

Boneset has been used for centuries as a medicine and is believed to have anti-inflammatory properties. The aboveground part of the plant can be harvested, dried, and steeped into a tea. It should be noted, however, that some studies have shown it to be toxic to the liver.