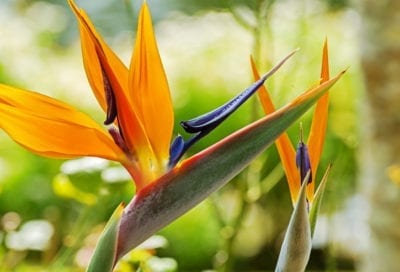 One of the most spectacular and impactful flowering plants for tropical to semi-tropical zones is Strelitzia bird of paradise. The growing conditions for bird of paradise, particularly the temperature range, are very specific. However, northern gardeners don’t despair. The plant can be grown in a container. If you want bird of paradise flowers, continue reading for tips on growing these unique beauties.

Growing Conditions for Bird of Paradise

Strelitzia reginae, also known as crane flower, is native to South Africa and derives its name from the unusual flowers, which resemble brightly colored birds in flight. The plant needs warm temperatures and plenty of sunshine to produce the characteristic blooms. They are hardy in USDA zones 9 to 11, but cooler regions can use them in containers outdoors in summer and move them inside as cooler temps arrive.

Bird of paradise care is not difficult, but the plants do need certain cultural conditions. Strelitzia bird of paradise needs rich soil that is well draining. It blooms most profusely when in full sun, but indoor plants should be slightly away from southern windows to avoid burning. Also, plants grown outdoors in desert climates should be planted in a partial shade situation.

There are several species of Strelizia, many of which are monster plants, so check the mature size and leave plenty of room for it to grow.

Bird of Paradise in Containers

Plant in a good potting soil that drains well. Water until the soil is saturated and then not again until it is dry to the touch. Reduce watering by half in winter.

Bird of paradise flowers need a lot of food to develop. Feed the plant in early spring every two weeks and once per month in summer with a soluble plant food.

Do not plant bird of paradise too deeply in the pot. It is said that some root exposure promotes flowers. Also, a pot bound plant will produce more blooms. When it is time to repot, about every three years in spring, only increase the pot size if the roots are extremely cramped.

Put container plants outside in summer but bring them indoors when fall arrives.

Divide in-ground plants every five years. Remove any broken or dead leaves as they occur. Remove spent flowers as they appear. Bird of paradise can also be propagated from seed; however, blooming will not begin for at least five years.

Container and in-ground plants have the same pest and disease issues. Mealybugs, scale, and spider mites are the most common problems with bird of paradise plants. Use a horticultural oil spray or systemic insecticide. Wipe or hose off the leaves to remove dust.

The most common diseases are fungus based. Water under the leaves or when the foliage can dry before nightfall. Avoid overwatering, which can cause several root rots.

Note: Dogs also enjoy nibbling on these plants, but the seeds are toxic, causing abdominal pain and vomiting so beware of this if you have pets.

With a little care, even cool region gardeners can enjoy the eye-popping blooms and tropical foliage of this plant.

Printer Friendly Version
Read more about Bird Of Paradise
Next>
Did you find this helpful? Share it with your friends!
FacebookTweetPinEmail
Related Articles
Newest Articles
You might also like…
Additional Help & Information