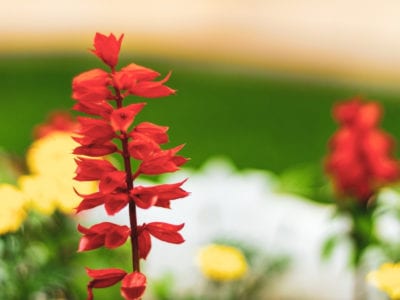 What is a Cardinal Flower?

The finely ground roots of this Native American wildflower were once traditionally used as aphrodisiacs and love potions, but the plant is toxic if eaten in large quantities. Therefore, it is better to stick only to growing and caring for cardinal flowers as opposed to using them medicinally.

How Do You Grow Cardinal Flowers?

Cardinal flowers grow best in a location with morning sun and afternoon shade, except in cool areas where they need full sun.

They need a moist, fertile soil and perform best if you work plenty of organic matter into the soil before planting. Set out new plants in spring, spacing them about a foot apart. Keep the soil very moist as the seedlings become established. A layer of organic mulch around the plants will help prevent water evaporation.

•Water your growing cardinal flowers deeply in the absence of rain.

•Fertilize the plants in fall with a shovelful of compost for each plant or a general purpose fertilizer.

•In USDA zones colder than zone 6, cover the plants in fall with a thick layer of pine mulch unless you expect heavy snow cover.

Cardinal flowers begin blooming in early summer and peak in mid- to late summer. Clip out the flower stems when they are done blooming, or leave them in place if you want the plants to self-sow. You’ll have to pull back the mulch so the seeds can fall directly onto the soil if you want seedlings. If you cut the spent flower spikes just above the leafy part of the stem, new spikes may arise to take their place, but they will be somewhat shorter than the first spike.