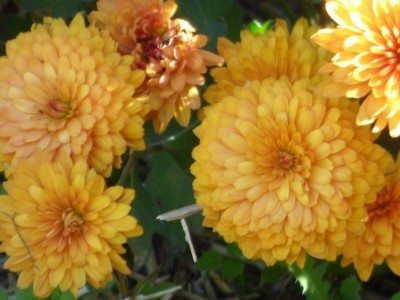 Chrysanthemums are flowering herbaceous plants, but are mums annual or perennial? The answer is both. There are several species of chrysanthemum, with some being hardier than others. The perennial type are often called hardy mums. Whether your chrysanthemum will come back after winter depends upon which species you have. If you aren’t sure which one you purchased, the best thing is to wait until next spring and see if there are any renewing leaves poking up from the soil.

Chrysanthemums were cultivated in China as early as 15th century B.C. The plants were used as herbs and the roots and leaves were eaten. The plant migrated to Japan several centuries later and thrived in the temperate climates of Asia. Today, the plant is a common fall garden sight and gift plant.

One fascinating bit of chrysanthemum information is that its favorable reputation in the U.S. doesn’t translate to some European countries where it is known as a death flower. Instead of giving chrysanthemums for special occasions, they are laid over graves.

There are so many types of chrysanthemum that they require a special classification system. This is based on one of the most unique facts about chrysanthemum flowers. The plant’s petals are actually florets with both sexual parts. There are both ray and disc florets and the classing system depends upon the type of florets as well as the growth.

If you aren’t terribly thrifty and you just use your mums for seasonal color, then it may not matter to you whether your plants are annual or perennial. However, it does seem a shame to let something so beautiful die and perennials are easy to grow and just keep giving season after season.

Also, garden mums tend to have smaller flowers than the annual potted variety. Outside of the fact that one plant will die while the other can persist, the question of annual vs. perennial chrysanthemums doesn’t matter if you are looking for single use fall color.

Even a perennial, hardy chrysanthemum needs a little TLC to survive winter’s harsh weather. Potted plants can be deadheaded and installed in well-worked soil with good drainage after they are finished blooming. You may choose to cut back the stems to 2 inches (5 cm.) from the ground in late fall or leave them until early spring.

Garden mums are hardy to United States Department of Agriculture zones 5 to 9, but will benefit from a blanket of mulch in the cooler regions. Avoid piling mulch around the stems, as it may promote rot.

Divide your mums every few years to promote healthier plants. Pinch plants back from early spring to mid July every two weeks for tighter, compact plants with a dense covering of spectacular flowers. Water regularly and fertilize in July.

These easy flowers are one of the work horses of the garden and will be consistent performers in gardens of almost every region.

Printer Friendly Version
Read more about Chrysanthemums
<PreviousNext>
Did you find this helpful? Share it with your friends!
FacebookTweetPinEmail
Related Articles
Newest Articles
You might also like…
Additional Help & Information