Cigar Plant
By: Becca Badgett, Co-author of How to Grow an EMERGENCY Garden
Printer Friendly Version 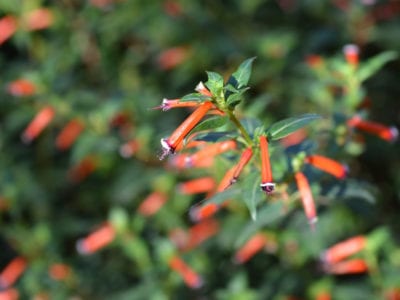 Cigar plant care (Cuphea ignea) is not complicated and the returning blooms make it a fun little shrub to grow in the garden. Let’s take a look at the ease and rewards of growing cigar plants in your landscape.

What is a Cigar Plant?

You may be wondering, just what is a cigar plant? An annual in most USDA plant hardiness zones, the cigar plant flower is a tender perennial in other places and is sometimes called firecracker plant. It is a small, multi-stemmed shrub with prolific red blooms that seem to burst like fireworks.

These small red flowers have black and white lips and a tubular shape similar to that of a cigar. The white rim gives the appearance of the cigar being lit, hence the common name. The cigar plant flower grows in zones 9b through 12 year-round but can grow as an annual in other areas.

When growing cigar plants as an annual in cooler zones, the blooms appear in summer. In the more tropical areas where it is hardy, cigar plants bloom off and on all year-round.

Botanically called Cuphea ignea, cigar plant flowers bloom in full sun to partial shade. The small cigar plant shrub usually reaches no more than 24 inches (61 cm.) in height, although some cigar plant info says it can reach a height and spread of up to 3 feet (1 m.). It generally remains in a neat, mounded clump. The attractive plant also entices hummingbirds to the garden.

Now that you know what a cigar plant is, think of starting a cigar plant for flowers in your landscape. Look for seeds online or at specialty plant outlets. If you know somebody who already has this plant, try starting one from a small cutting. Care of cigar plant is minimal; no pests or diseases are common.