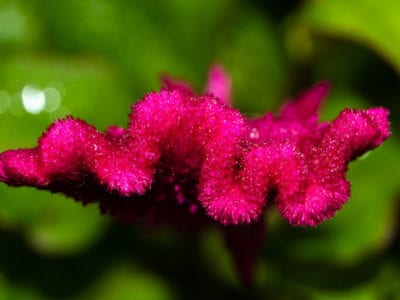 The Lagos spinach plant is cultivated throughout much of Central and Southern Africa and grows wild in East and Southeast Asia. Many Western gardeners are growing Lagos spinach as we speak and probably don’t even know it. So what is Lagos spinach?

What is Lagos Spinach?

Cockscomb Lagos spinach (Celosia argentea) is a variety of Celosia grown as an annual flower in the West. The genus Celosia contains about 60 species native to tropical regions.

Celosia is divided into five categories according to the type of inflorescence or “bloom.” The Childsii group is composed of terminal inflorescence that looked like fuzzy, colorful cockscombs.

Other groups have flattened cockscombs, are dwarf varieties, or bear plumed or feathery inflorescences.

In the case of Lagos spinach celosia, rather than growing as an annual flower, Lagos spinach plant is grown as a food source. In West Africa there are three types grown all with green leaves and, in Thailand, the predominantly grown variety has red stems with deep purple leaves.

The Lagos spinach plant is rich in protein and vitamin C, calcium and iron with the red varieties, also high in anti-oxidant properties. In Nigeria where it is a popular green veggie, Lagos spinach is known as ‘soko yokoto’ meaning ‘make husbands fat and happy’.

Young shoots and older leaves of Lagos spinach Celosia are cooked in water briefly to soften the tissues and remove oxalic acid and nitrates. The water is then discarded. The resulting vegetable is much like spinach in appearance and flavor.

Lagos spinach plants can be grown in USDA zones 10-11 as perennials. This herbaceous plant is otherwise grown as an annual. Plants are propagated via seed.

Lagos spinach Celosia requires moist, well-draining soil that’s rich in organic matter in full sun to part shade. Depending upon the variety of Celosia and soil fertility, plants can grow up to 6 ½ feet (2 m.) but are more commonly around 3 feet (just under a meter) in height.

Leaves and young stems are ready for harvest about 4-5 weeks from sowing.

Printer Friendly Version
Read more about Cockscomb Flowers
<Previous
Did you find this helpful? Share it with your friends!
FacebookTweetPinEmail
Related Articles
Newest Articles
You might also like…
Additional Help & Information