What Are Costus Plants – Learn About Growing Costus Crepe Ginger 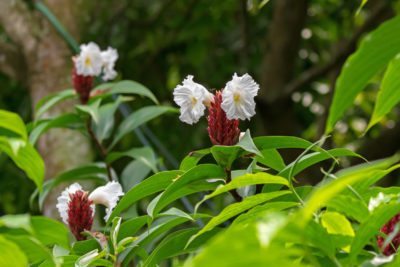 Costus plants are pretty plants related to ginger that produce a stunning flower spike, one per plant. While these plants require a warm climate, they can also be enjoyed in containers that can be brought indoors in the winter in colder climates.

What are Costus Plants?

Costus plants are related to ginger and at one time were classified with them in the Zingiberaceae family. Now they have their own family, Costaceae. These plants are subtropical to tropical and develop from a rhizome that produces one flower on a spike. Costus plants are great for height in the landscape, as they can grow up to 6 to 10 feet (2-3 m.) tall. They are hardy to zones 7 through 12.

The costus plants come in several varieties. Most common is Costus speciosus, also known as crepe ginger. The name describes the crepe-like, pale pink flowers. Crepe ginger is one of the tallest varieties of costus.

Costus varzeareanum is an interesting addition to the garden. Its purple leaf undersides provide color and interest even when the plant is not flowering. Another variety, Costos productus, grows lower than other types of costus. It also has edible, sweet-tasting flowers.

You will also find many other varieties of costus when searching for crepe ginger and its relatives. There are multiple cultivars as well, which include different colors of flowers, like yellow, chocolate brown, pink, red, orange, and everything in between.

How to Grow Costus Plants

Growing costus crepe ginger and other varieties of this subtropical to tropical plant is not hard if you have the right conditions and costus plant information. These plants need warmth and will not tolerate much frost. They do need to be kept drier in the winter though. Fertilize and keep them moist in the spring.

All varieties of costus are well suited to partial shade and morning light. With more sun, these plants need more water. Regardless of location, they should be well watered at all times. Soil should be light and needs to drain well.

Pests and diseases are not major issues for costus plants.