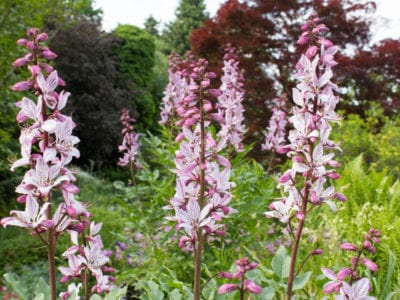 Dictamnus gas plant is also known by the common name “Burning Bush” (not to be confused with the Euonymus burning bush) and is native to many areas of Europe and throughout Asia. Ancient lore suggests that Dictamnus gas plant is thus named due to its purported ability to serve as a light source, owing to the lemony scented oils it exudes. While doubtful this oily extract will replace tallow, butane, or other energy sources for light, it remains a wonderful perennial plant.

What is a Gas Plant?

So, what is gas plant beyond a bit of an old wives tale? Growing gas plants (Dictamnus albus) reach a height of about 4 feet (1 m.) tall with quite woody stems at the base. In the early summer, June and July, Dictamnus gas plant blooms with long, spikes of white flowers set off by glossy green leaves. Once the flowers have faded, spectacular seedpods remain that are commonly used in dried floral arrangements.

The Dictamnus planting guide advises us that the gas plant is hardy in USDA plant hardiness zones 3-8. Growing gas plants thrive in full sun in well-drained soil with a high organic matter. That said, the gas plant is fairly tolerant of poor soils and even partial sun.

Start gas plants from seeds sown outdoors in the fall and allowed to stratify through the winter months.

Once gas plant has been established, it should not be moved or any attempt made to divide it. At maturation after several years, the growing gas plant will appear as a clump with stunning stands of flowers poking from amongst its foliage.

When it comes to gas plant garden care, the growing gas plants prefer consistent irrigation but can withstand periods of drought once they are established. Slightly alkaline soil is preferable for more vibrant and vigorous plants as well as areas of cool evening temperatures.

This herbaceous perennial may also be listed as dittany or fraxinella, members of the Rutaceae family. Some patience is necessary when growing gas plants as they take several years to mature.

The strongly citrus-scented flowers and foliage may cause an allergic skin reaction in some people and seems to be repellent to deer. The gas plant is a non-aggressive and non-invasive specimen.

Gas plants can be found in several different varieties such as: