Geraniums
By: Becca Badgett, Co-author of How to Grow an EMERGENCY Garden
Printer Friendly Version 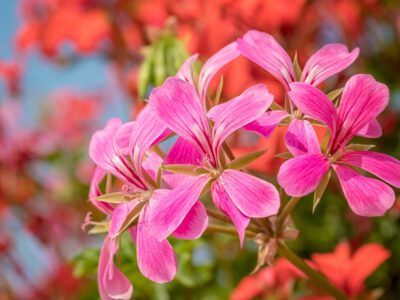 Ivy leaf geranium spills from window boxes on picturesque Swiss cottages, sporting attractive foliage and perky blossoms. Ivy leaf geraniums, Pelargonium peltatum, are not as common in the United States as their relative, the popular Zonal geranium. As more gardeners plant them, however, and see the beautiful and bountiful blooms appear, growing ivy geraniums may soon become a common gardening delight.

More than 75 different commercial cultivars of trailing geranium ivy are becoming more widely available to the home gardener in this country. Flowers and foliage colors vary among cultivars, as does the habit of ivy leaf geranium.

Some specimens take on a shrub-like appearance, others spread and offer an attractive ground cover for an area with dappled sun. Some have mounding habits and most are excellent specimens for container plantings.

Ivy leaf geranium blooms have semi-double flowers in colors from white to red, and most pastels in every color except blue and yellow. Flowers are “self-cleaning” so deadheading is not needed as part of care for ivy geraniums.

Locate trailing geranium ivy in full sun if temperatures remain below 80 F. (27 C.), but in hotter temperatures, plant them in partial shade. Protection from the hot afternoon sun is an important part of ivy geranium care. Too much bright sun may result in small, cup-shaped leaves and small blooms. An eastern exposure is the best area for growing ivy geraniums.

Care for ivy geraniums is easy if you maintain proper watering practices. Watering ivy leaf geranium must be consistent. Moderate soil moisture levels, not too much and not too little, is necessary to prevent edema, which causes ruptured plant cells, manifesting in corky blemishes on the underside of leaves. This weakens the plant, making it susceptible to pests and other diseases. Get on a regular schedule for watering as a part of care for ivy geraniums.

When growing ivy geraniums in containers, watering is particularly important. Keep the soil moist, paying special attention to ivy leaf geranium in hanging baskets that get air circulation in all areas.

Fertilize with a slow-release pelleted fertilizer as part of ivy geranium care.