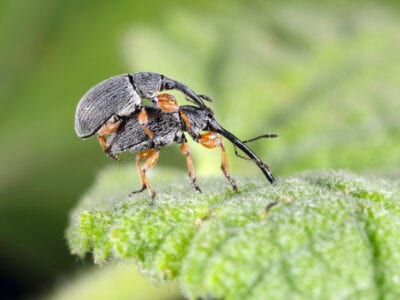 Hollyhocks (Alcea rosea) lend an old-fashioned charm to the back of the garden border, or serve as a seasonal living fence, creating a little extra privacy through the spring and summer. Even though these plants are often extremely tough, a little hollyhock pest control will keep your bed filled with blooms for years to come.

What are Hollyhock Weevils?

Hollyhock weevils (Apion longirostre) are gray snout beetles with orange legs, measuring 1/8 to 1/4 inch (3-6 mm.) long, including their pronounced proboscis, which is significantly longer in females than males. Hollyhock weevil adults overwinter in the soil of infested hollyhock beds, emerging from hiding in spring to feed and lay their eggs. The female chews a small hole in a flower bud before inserting a single egg, repeating this process many times.

The hollyhock weevil egg doesn’t interfere with flower formation but instead becomes enveloped inside the hollyhock seed pod as it develops. Here, the larvae feed and pupate, emerging as adults and dropping into the soil from late summer to early fall. Hollyhock weevils produce just one generation a year in most locations.

Weevil pests on hollyhocks cause only minor visual damage, chewing small holes in hollyhock leaves and flowers. However, they can cause serious damage to the overall lifespan of hollyhock stands. Larval hollyhock weevils develop within the hollyhock seed pods, using embryonic seeds for food. When the seed pods are mature, they are often empty, preventing hollyhocks from self-seeding. Since these plants are short-lived perennials at best and may require two years to produce blooms, hollyhock weevil larvae can seriously disrupt the life cycle of your hollyhock bed.

A careful watch for adults and feeding damage in the spring will clue you into the nighttime visitations of hollyhock weevils. You should examine your plants carefully after dark with a flashlight to determine the extent of your pest problem before deciding how to proceed. Often, hollyhock weevils can be handpicked from hollyhock leaves and buds and dropped into a bucket of soapy water to drown.

Safer insecticidal options are available when hollyhock weevils cling tightly to leaves or there are so many feeding on your plants that hand-picking becomes an insurmountable task. Spray insecticidal soap directly on these pests; it will kill them on contact. If caught early in the season, you may be able to prevent them from laying eggs by checking nightly and destroying the pests you find, until no more hollyhock weevils are detected.

If your hollyhock seeds couldn’t be spared from the hollyhock weevil’s efforts, you should destroy seed pods as soon as they become visible to destroy eggs, larvae, and pupae. Although this will have a serious impact on the next generation of hollyhocks, chances are good that many of the seeds would have already been consumed. In the long-run, removing one season’s seeds may save your entire stand and keep the area friendly to future hollyhock plantings.