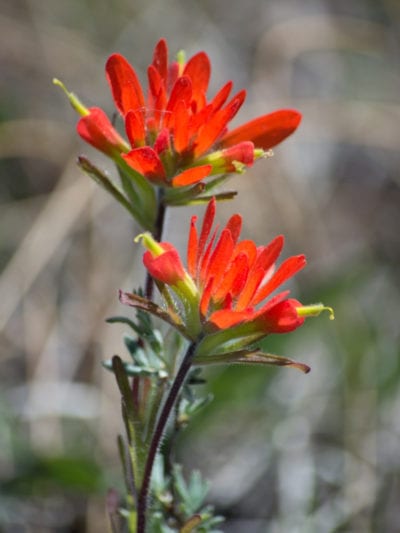 Indian paintbrush flowers are named for the clusters of spiky blooms that resemble paintbrushes dipped in bright red or orange-yellow paint. Growing this wildflower can add interest to the native garden.

About the Indian Paintbrush

Also known as Castilleja, Indian paintbrush wildflowers grow in forest clearings and grasslands across the western and southwestern United States. Indian paintbrush is a biennial plant that usually develops rosettes the first year and stalks of blooms in spring or early summer of the second year. The plant is short-lived and dies after it sets seed. However, if conditions are right, Indian paintbrush reseeds itself every autumn.

This unpredictable wildflower grows when it is planted in close proximity with other plants, primarily grasses or native plants such as penstemon or blue-eyed grass. This is because Indian paintbrush sends roots out to the other plants, then penetrates the roots and “borrows” nutrients it needs in order to survive.

Indian paintbrush tolerates cold winters, but it doesn’t perform well in the warmer climates of USDA zones 8 and above.

Growing Indian paintbrush is tricky, but it isn’t impossible. The plant doesn’t do well in a manicured formal garden and has the best chance of success in a prairie or wildflower meadow with other native plants. Indian paintbrush needs full sunlight and well-drained soil.

Plant seeds when the soil is between 55 and 65 degrees F. (12-18 C.). The plant is slow to germinate and may not make an appearance for as long as three or four months.

Colonies of Indian paintbrush will eventually develop if you help the plant by planting seeds every autumn. Clip the blooms as soon as they wilt if you don’t want the plant to reseed itself.

Do not fertilize Indian paintbrush.

If you want to save Indian paintbrush seeds for later planting, harvest the pods as soon as they begin to appear dry and brown. Spread the pods to dry or place them in a brown paper bag and shake them often. When the pods are dry, remove the seeds and store them in a cool, dry place.