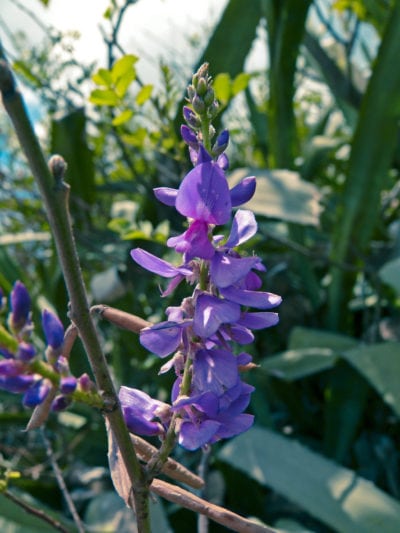 The popular color “indigo” is named after several plants in the genus Indigofera. These varieties of indigo are famous for the natural blue colors obtained from the plant leaves used to make a natural dye. Some indigo plant varieties are used medicinally, while others are beautiful and ornamental. Read on for more indigo plant information and an overview of the different indigo plants.

According to indigo plant information, these plants are native to subtropical as well as tropical locations around the world. They are members of the pea family.

Some indigo plant varieties have beautiful flowers. For example, the flowers of Indigofera amblyanthan are soft pink racemes and cultivated for their ornamental beauty. One of the most attractive indigo shrubs is Indigofera heterantha, with its long clusters of rosy purple, pea-like flowers.

It is the leaves that make most types of indigo famous though. For many years, the leaves of certain indigo plants were used to make dye to color fabrics a rich blue. It was once the most commonly used natural dye in the world.

Making Dye from Varieties of Indigo

These varieties of indigo were the center of an important industry in India. The cultivation of indigo for dye slowed after synthetic indigo was developed. Now the dye is typically used by craftspeople.

While synthetic indigo produces an even blue, natural indigo contains impurities that give beautiful color variations. The shades of blue you get from the dye depends on where the indigo was grown and in what weather.

Several indigo plant varieties have been used medicinally, however, true indigo is the most common utilized species and was popular with the Chinese to clean the liver, detoxify the blood, reduce inflammation, alleviate pain, and reduce fever.

Some indigo plants, however, like creeping indigo (Indigofera endecaphylla), are toxic. They poison grazing livestock. Other indigo plant varieties, when consumed by humans, can cause diarrhea, vomiting, and even death.

Printer Friendly Version
Read more about Indigo Plant
<PreviousNext>
Did you find this helpful? Share it with your friends!
FacebookTweetPinEmail
Related Articles
Newest Articles
You might also like…
Additional Help & Information