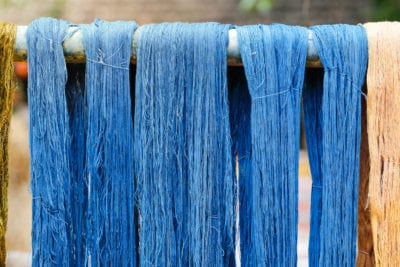 The blue jeans you are wearing today are likely colored using a synthetic dye, but that wasn’t always the case. Unlike other colors that could easily be obtained using bark, berries and the like, blue remained a difficult color to recreate – until it was discovered that dye could be made from indigo plants. Making indigo dye, however, is no easy task. Dyeing with indigo is a multi-step, labor intensive process. So, how do you make dye indigo plant dye? Let’s learn more.

The process of turning green leaves into bright blue dye through fermentation has been passed down for thousands of years. Most cultures have their own recipes and techniques, often accompanied by spiritual rites, to create natural indigo dye.

The birthplace of dye from indigo plants is India, where the dye paste is dried into cakes for ease of transportation and sale. During the industrial revolution, demand dyeing with indigo reached its zenith due to the popularity of Levi Strauss blue denim jeans. Because making indigo dye takes a lot, and I mean A LOT of leaves, demand began to exceed supply and so an alternative began being sought after.

In 1883, Adolf von Baeyer (yes, the aspirin guy) began to investigate the chemical structure of indigo. In the course of his experimentation, he found out that he could replicate the color synthetically and the rest is history. In 1905, Baeyer was awarded the Nobel Prize for his discovery and blue jeans were saved from extinction.

How Do You Make Dye with Indigo?

In order to make indigo dye, you need leaves from a variety of plant species such as indigo, woad, and polygonum. The dye in the leaves doesn’t actually exist until it is manipulated. The chemical responsible for the dye is called indicant. The ancient practice of extracting indicant and converting it to indigo involves the fermentation of the leaves.

First, a series of tanks are set up step-like from highest to lowest. The highest tank is where the fresh leaves are placed along with an enzyme called indimulsin, which breaks the indicant down into indoxyl and glucose. As the process takes place, it gives off carbon dioxide and the contents of the tank turn a dirty yellow.

The first round of fermentation takes around 14 hours, after which the liquid is drained into the second tank, a step down from the first. The resulting mix is stirred with paddles to incorporate air into it, which allows the brew to oxidize the indoxyl to indigotin. As the indigotin settles to the bottom of the second tank, the liquid is siphoned away. The settled indigotin is transferred to yet another tank, the third tank, and heated to halt the fermentation process. The end result is filtered to remove any impurities and then dried to form a thick paste.

This is the method by which the Indian people have been deriving indigo for thousands of years. The Japanese have a different process which extracts indigo from the polygonum plant. The extraction is then mixed with limestone powder, lye ash, wheat husk powder and sake, of course, because what else would you use it for but to make dye, right? The resultant mix is allowed to ferment for a week or so to form a pigment called sukumo.

Printer Friendly Version
Read more about Indigo Plant
<PreviousNext>
Did you find this helpful? Share it with your friends!
FacebookTweetPinEmail
Related Articles
Newest Articles
You might also like…
Additional Help & Information