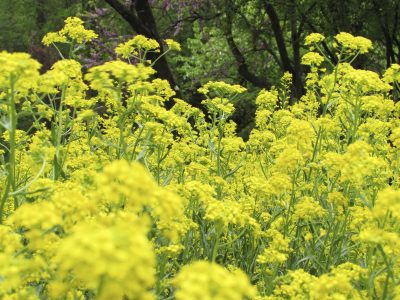 Indigo blue was a pretty hot color 5,000 years ago. The production and trade of this dye became hotly contested when Eastern Indian merchants began to introduce indigo to Europe where woad was the preferred dye. Confused, yet? What is a woad plant and what other interesting woad plant information can we dig up? Is there a difference between indigo and woad plant dyes? Read on to find out.

What is a Woad Plant?

Woad (Isatis tinctoria) is an erect biennial that grows to between 1-3 feet (30-90 cm.), sometimes up to 4 feet (1.2 m.) in height. Its leaves are bluish green overlaid with a powdery white fluff. The leaves are narrow and lightly serrated to wavy. The plant blossoms with small yellow flowers in the spring of its second year of growth and develops into blue/black fruit. The plant was cultivated for centuries as a medicinal and source of blue dye.

In some areas of the world, the once valuable woad plant is considered a weed and, indeed, grows as such.

Woad was indigenous to southeastern Europe and rapidly spread throughout during prehistoric times. In most of Europe, woad plant dyes became the predominate blue dye of choice and, in fact, is sometimes referred to as “dyers woad.” The blue dye from woad plants was used by ancient peoples of the British Isles to paint their bodies in the hopes of frightening their foes.

On the other hand, Indigo (Indigofera tinctoria), a native of southern Asia was the popular choice for blue dye there. Production and trade was controlled by India. The import of indigo dyes began to increase amongst woad producers. They united to fight the importation of indigo and save their livelihoods. Slowly but surely, despite legislation, indigo took the upper hand and became the preferred dye in Western Europe.

Of course, by the late 1800’s, the introduction of synthetic indigotine (synthetic indigo dye) made the dispute between woad and indigo purveyors a moot point. Still, while the blue dye from woad plants does bleed and fade with age, it is just this fading that makes it a unique and worthy dying medium. If you are interested in using woad as a dye, the best thing to do is grow your own. Keep reading to find out how to grow woad plants.

How to Grow Woad Plant

Woad is very competitive and can displace valuable crops, native vegetation and rangeland. It also has an extremely long tap root (3-5 feet or 0.9-1.5 m. long) that makes it almost indestructible. Hence, many places deem woad too invasive and label it a noxious weed.

That said, woad seed can be obtained online or if you happen upon a patch of it, you can harvest your own seeds. Sow seeds thinly space in March in seed trays. Cover lightly with soil and keep moist.

When the seedlings are large enough to handle, transplant them outside, leaving a foot of space between each. Woad likes an alkaline soil, so an application of lime, one week prior to planting, will give them the proper soil pH. Keep the woad seedlings moist.

Do not replant woad in the same area as other Brassicae. Like other members of the cabbage family, woad is susceptible to clubroot, which can be passed from member to member, so practice crop rotation.

Once established, other than water and a little fertilizer, there is little additional woad plant care until harvest. Woad needs lots of nitrogen, so fertilize with a high nitrogen food of dried blood meal or hoof and horn meal.

Woad will be ready to harvest in July all the way through September. In some areas, woad can be harvested until November, but the onset of fall frosts will likely lessen the color.

To harvest your plants, use sharp pruning shears or garden scissors to cut the newer leaves back. Avoid the old leaves which are easily recognizable by their blue hue. The old leaves don’t have the chemical in them anymore that will become dye. Cut the old back too, though, just don’t use them in the dye-making process. It is better to cut all of the leaves of a plant back at once and then let it regrow.

Now you are ready to use the leaves for dye extraction. Put the fresh leaves into a jar and cover with almost boiling water. Seal the jar. Soon the water will become colored and begin to bubble a bit. At this juncture, alkali is added to the colored water, shaken and the solution turns green.

Fabric is then dyed using the green/yellow colored dye. Where’s the blue? Once the fabric is exposed to air, oxidation takes over and voila! You have a lovely blue. The process is finished by setting the dye in acid and then it’s washed and rinsed.

Comprehensive instructions can be found online, but it sounds like some trial and error might be required. Apparently, the dye is tricky to work with.

For those of you who wouldn’t think of cultivating woad and just want to get rid of the darn things, there are both chemical and non-chemical controls.

Non-chemical methods of eradication include hand pulling, which since the tap root is so deep, is quite difficult. Also, revisit the woad site every couple of weeks, as the plant readily self-sows and can do so for many years. You can mow it for a very temporary control, or try some goats on it.

A native rust fungus is being investigated as a biological control but isn’t available as yet.

The other option is chemical control. Consult your local extension office for recommendations regarding herbicides for use in your area.

Printer Friendly Version
Read more about Woad Plant
Next>
Did you find this helpful? Share it with your friends!
FacebookTweetPinEmail
Related Articles
Newest Articles
You might also like…
Additional Help & Information