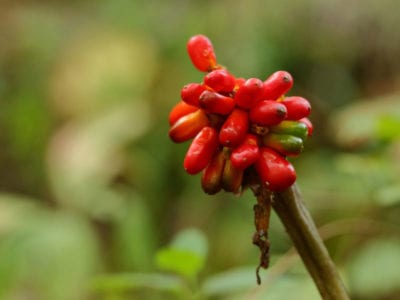 About Jack in the Pulpit Seed Germination

After jack in the pulpit (Arisaema triphyllum) flowers are pollinated by insects crawling into the spathe or hood of the plant, the spathe withers and small clusters of green berries appear. The berries continue to grow and change hue from green to orange by August and then to a brilliant red by September. This fire engine red is the signal to harvest the berries for propagation.

Once you have the berries, you need to locate the seeds which are inside the berry. There should be one to five white seeds inside. Roll the berries around in a gloved hand until the seeds are visible. Remove them from the berry.

At this point, you would think that planting the seeds is all that needs doing but propagating jack in the pulpit from seed depends on a period of stratification first. You can either deposit the seeds in the soil outside, water in well, and let nature take its course or stratify the seeds indoors for later propagation. To stratify jack in the pulpit seeds, place them in moist sphagnum peat moss or sand and store them in the refrigerator in a plastic bag or storage container for two to two and a half months.

How to Plant Jack in the Pulpit Seeds

Once the seeds have been stratified, plant them in a container of soilless potting medium and barely cover. Keep the seeds consistently moist. Jack in the pulpit germination should take place in around two weeks.

Most growers keep jack in the pulpit seedlings indoors for about two years prior to transplanting outdoors. Once the seedlings are ready, amend a shaded area of soil with plenty of compost and leaf mold then transplant the plants. Water in well and keep consistently damp.