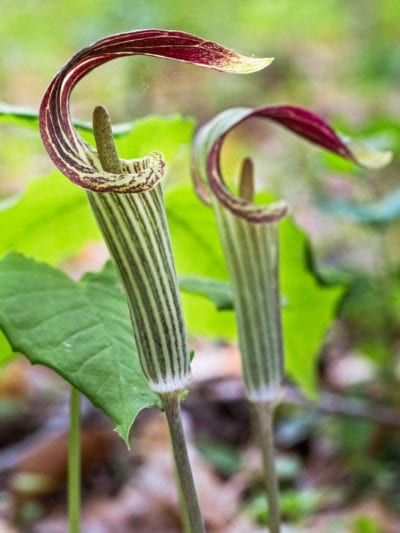 How Does Jack-in-the-Pulpit Reproduce?

During sexual propagation, pollen is transferred from male blooms to female flowers by pollinators via a method called sexual hermaphroditism. This means that any plant may be male, female, or both. When growing conditions are prime, plants tend to produce female blooms. This is because females take more energy since they will form brilliant red berries or seeds for propagating future jack-in-the-pulpit plants.

Come spring, a single shoot emerges from the soil with two sets of leaves and a solitary flower bud. Each leaf is made up of three smaller leaflets. When the bloom opens, a leaf-like hood called a spathe appears. This is the ‘pulpit.’ Inside the folded over spathe is a rounded column, ‘Jack’ or spadix.

Both male and female blooms are found on the spadix. Once the blossom is pollinated, the spathe shrivels up revealing a cluster of green berries which grow in size and ripen to a brilliant crimson color.

How to Propagate Jack-in-the-Pulpit

The green berries shift from orange to red as they mature in late summer. By early September, they should be bright red and a bit soft. Now is the time for propagating jack-in-the-pulpit.

Using scissors, snip the berry cluster from the plant. Be sure to wear gloves as the sap from the plant irritates some people’s skin. Inside each berry are four to six seeds. Gently squeeze the seeds from the berry. The seeds can be directly sown or started inside.

Outside, plant seeds half an inch (1 cm.) deep in a moist, shaded area. Water the seeds in and cover with an inch (2.5 cm.) of leaf mulch. The seeds will stratify over the coming cold months.

To propagate indoors, stratify the seeds for 60 to 75 days. Place them in sphagnum peat moss or sand and store them in the refrigerator for two to two and a half months in plastic bags or containers. Once the seeds have stratified, plant them ½ inches (1 cm.) deep in a soilless potting medium and keep moist. Plants should germinate in about two weeks.

Many growers continue to grow indoor jack-in-the-pulpit propagations inside for up to two years before transplanting outside.