Lacy Phacelia
By: Becca Badgett, Co-author of How to Grow an EMERGENCY Garden
Printer Friendly Version 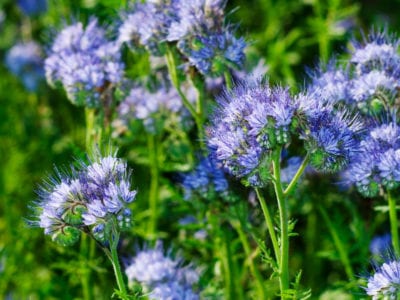 The lacy phacelia flower, commonly known as Phacelia tanacetifolia, may not be something you’d randomly plant in your garden. In fact, you may wonder just what is lacy phacelia? Read on to find out.

What is Lacy Phacelia?

Lacy phacelia info says the plant is well-known for its ability to attract bees and butterflies to an area. Some refer to the lacy phacelia flower as the honey plant, as it is one of the top 20 flowers used in the natural production of honey.

There appears to be a shortage of pollinators for the garden because of massive honeybee die-offs. As pollinators seem to be getting scarcer, we’d all like to find ways of attracting more of them to our home landscape.

Lacy phacelia growing in or near the garden not only attracts bees, but butterflies as well. Include the purple tansy wildflower near vegetable and ornamental gardens for bigger blooms and vegetables. Lacy phacelia growing is sometimes used in almond orchards for this purpose. Beware of aggressive spread of this plant, however, which multiplies by the spread of rhizomes and self-seeding.

Additional lacy phacelia info says purple tansy wildflowers bloom from April through July. They’re often found growing in ditches, along roadsides, and in open meadows. You can plant them from seeds. Try growing purple tansy wildflower in containers that can be moved around the garden as different areas need pollination. This may help control the spread of the wildflower too. Be sure to include this plant in areas designed to attract butterflies and in water-wise gardens.

The lacy phacelia flower grows best in sunny spots where the soil is poor, rocky, or sandy. If the soil in your flower beds has been amended, try growing the purple tansy wildflower outside of the garden, but close enough that bees and butterflies can conveniently pollinate the garden blooms.