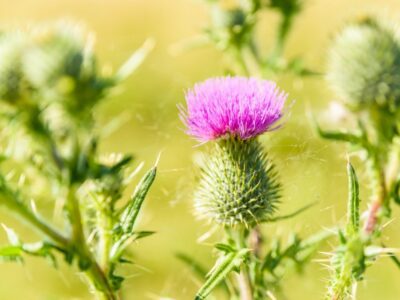 Thistle type weeds are every gardener’s bane. From their prickly stems to their deep tap roots, thistle is one of the most annoying weeds to eradicate. What’s more, some species of these prolific self-seeders are invasive and can quickly overtake an area. Which can leave the unwary gardener in a thorny situation.

Thistle is an adaptive plant which can grow almost anywhere from roadsides and pastures to flowerbeds and lawns. Depending upon the species, thistle can be biennials which form low-growing rosettes their first year. After flowering their second year, biennials die. Other types of thistles are perennials. They grow and spread for many years.

Worldwide, approximately 200 species of thistle have been identified, many of which are native to North America. While gardeners might not appreciate these wildflowers in their well-manicured landscape, native species are a key part of the ecosystem. They provide food to birds, butterflies, and pollinators.

Invasive varieties of thistle originated in Europe and Asia and were likely introduced when importing seeds. Lack of disease and insect pests has allowed these noxious species to spread throughout North America. As these introduced species threaten native flora and disrupt the ecosystem, it’s prudent to eliminate them in open areas as well as in the home garden.

Proper identification is key to eradicating invasive and noxious species of thistle. Of the many different types of thistle, these four are considered the most problematic: