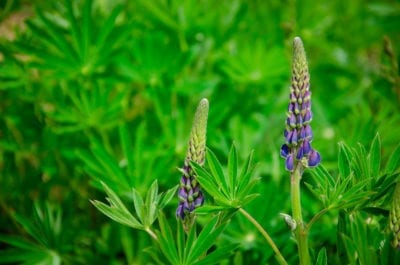 Arroyo lupine plants (Lupinus succulentus) are the welcome signs of spring on the rocky slopes and grasslands of the Western United States. Here the spiky violet-blue, pea-like blooms are easily spotted by spectators. The lush, palm-shaped leaves are an added benefit. Pollinators, including bees and butterflies, are highly attracted to these plants. The seeds sustain birds and small animals. Wondering how to grow an arroyo lupine? Read on for more arroyo lupine information.

Arroyo lupine plants tolerate light shade, but they bloom best in full sunlight. This popular wildflower adapts to nearly any soil type, including loam, gravel, sand, or clay. However, they often struggle and may not survive in highly alkaline conditions.

Well-drained soil is essential, as arroyo doesn’t tolerate soggy, waterlogged soil. Be sure not to plant arroyo lupine where the soil remains wet during the winter.

How to Grow an Arroyo Lupine Plant

Plant arroyo lupine in early spring. Amend the soil generously with compost and coarse sand to improve drainage. Dig a hole deep enough to accommodate the roots. Alternatively, plant arroyo lupine seeds in late spring, and they will bloom the following year. Before planting, scuff the seeds with sandpaper or soak them in water for 24 to 48 hours.

Water this lupine plant regularly the first few months or until the roots are established, but allow the soil to dry between waterings. Afterwards, your plants will only need water during extended periods of hot, dry weather. A layer of mulch will conserve water and keep weeds in check; however, the plants may rot if mulch is allowed to pile up on the crown.

No fertilizer is required in the care of arroyo lupines. A thin layer of compost is a good idea though, especially if your soil is poor. Be sure to keep the compost away from the crown of the plant. Arroyo lupine plants reach heights of 1 to 4 feet (.3 to 1.2 m.). You may need to stake tall plants in windy areas.

Printer Friendly Version
Read more about Lupine
<Previous
Did you find this helpful? Share it with your friends!
FacebookTweetPinEmail
Related Articles
Newest Articles
You might also like…
Additional Help & Information