Lupine
By: Becca Badgett, Co-author of How to Grow an EMERGENCY Garden
Printer Friendly Version 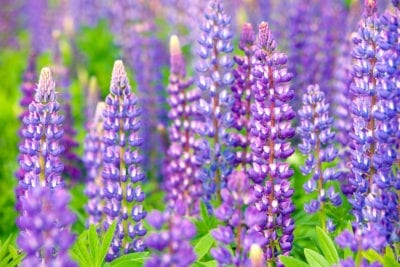 Lupines (Lupinus spp.) are attractive and spiky, reaching 1 to 4 feet (30-120 cm.) in height and adding color and texture to the back of a flower bed. Lupine flowers may be annual and last only for a season, or perennial, returning for a few years in the same spot in which they were planted. The lupine plant grows from a long taproot and does not like to be moved.

Lupines grow wild in some areas of the United States, where they are hosts for the larvae of endangered species of butterflies. Wildflowers of the lupine plant generally come in in hues of blues and white, although domesticated lupines offer flowers in blues, yellows, pinks and purples. Tall, spiky racemes produce lupine flowers similar to those of the sweet pea plant.

How to Grow Lupines

Growing lupines is as simple as planting seeds or cuttings into a sunny area with well-drained soil. If planting lupine from seed, scratch the seed surface or soak seeds overnight in lukewarm water to allow the seed coat to be easily penetrated. Seeds of the lupine plant may also be chilled for a week in the refrigerator prior to planting.

This may also be accomplished by planting lupine seeds in the fall and letting Mother Nature do the chilling through the winter. Direct sowing of lupine seeds in autumn is perhaps the easiest method. Lupines produce seed which will re-produce more flowers the following year if not removed from the growing lupine.

Average soil is best for growing lupines. Utilize this trait and plant lupines in areas of the landscape that have not been composted or amended in other ways.

To encourage blooms, fertilize lupines with a plant food that is high in phosphorus. Nitrogen rich fertilizer may encourage growth of the foliage and do little to promote flowering. Deadhead spent blooms for returning lupine flowers.

The lupine plant fixes nitrogen in the soil and is a great addition to your vegetable garden or any area where nitrogen loving plants will be grown. A member of the pea family, lupines are beneficial in many ways.

Now that you know how to grow lupines, add this tall, showy bloom to an area where lupine flowers will be visible and act as background for other full-sun blooms. A flowering ground cover planted beneath the lupine plant helps keep roots cool and will benefit from the nitrogen in the soil, creating a showy display in the landscape.

Printer Friendly Version
Read more about Lupine
Next>
Did you find this helpful? Share it with your friends!
FacebookTweetPinEmail
Related Articles
Newest Articles
You might also like…
Additional Help & Information