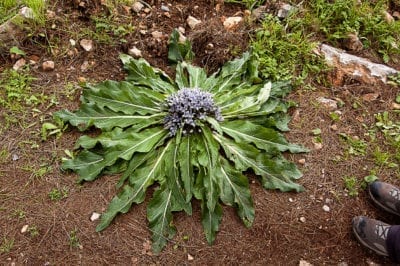 Growing mandrake is a way to add history and myth to your garden. Known since ancient times, this Mediterranean native has long been used medicinally and feared for supposed associations with the devil and deadly roots – the plant is toxic. Mandrake division is one way to propagate this plant, but the roots are sensitive to disturbance, so it must be done with care.

About Mandrake Roots and Rhizomes

Mandrake, Mandragora officinarum, is most famous for its root. The large, thick taproot splits characteristically into a shape that resembles the human form. This gave rise to many of the legends associated with the plant.

Mandrake plants propagate naturally through rhizomes. These fleshy, underground growths are actually specially adapted stems. They grow under the soil and send out new shoots and roots. These develop out of the rhizome’s nodes. Rhizomes spread out to the sides of a plant and send up shoots for new plants above ground.

How to Divide Mandrake

Splitting mandrake plants’ rhizomes is one way to propagate them by hand. A word of caution, though: mandrake roots are sensitive and do not like to be moved or disturbed. Dividing perennials is often something gardeners do to keep them healthy and to avoid crowding. But with mandrake, it’s sometimes best to just leave it alone. If you do want to divide them, don’t do it often.

Here are some guidelines for separating mandrake roots and rhizomes to propagate the plants or thin a stand:

Growing mandrake can be rewarding, but division requires careful work so as not to destroy the root or plant. Also, remember to be careful with this plant because of its toxicity. It should never be consumed and should be kept out of reach of pets and kids.