Orchids
By: Becca Badgett, Co-author of How to Grow an EMERGENCY Garden
Printer Friendly Version 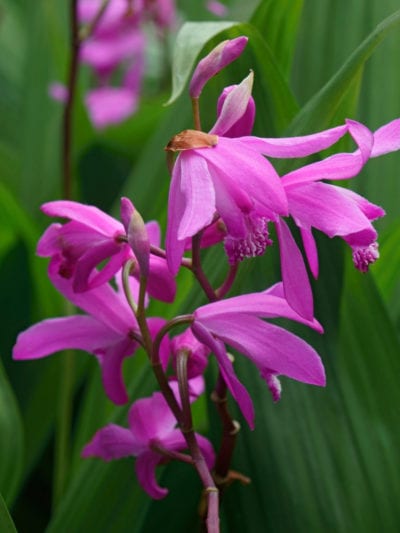 When thinking of orchids, many gardeners consider the tropical Dendrobiums, Vandas, or Oncidiums that grow indoors and need considerable care. However, when planting your home garden, don’t forget about hardy garden orchids, the ones that grow outside in the ground and bloom reliably in spring. These are also called terrestrial orchids (meaning in the ground).

Hardy orchid care is surprisingly easy and growing hardy orchids offers a range of bloom colors to put on a show in the spring garden. Growing hardy orchids is not complicated; they grow from rhizomes planted in the part sun, part shade garden in USDA Zones 6-9. Flowers of hardy orchid plants range in shades of white, pink, purple, and red.

Hardy garden orchid B. striata, considered the hardiest, was cultivated first. Then came cultivars Gotemba Stripes and Kuchibeni, both of the Japanese types. Kuchibeni has two-tone flowers, while Gotemba Stripes has striped foliage.

How to Grow Hardy Garden Orchids

Growing hardy orchids here in the United States need a rich, loamy soil similar to that of the woodland floor. Morning sun and afternoon shade are ideal when growing hardy orchids. Some need the winter chill to flower properly and may take a couple of years to exhibit optimum bloom quality.

Hardy orchid plants have shallow roots, so take care when doing the weeding that is a necessary part of hardy orchid care.

Grow garden orchids in soil that drains well. Some of these plants do not like consistently moist soil, such as the upland species, so sharp drainage is required. Others of the wetland species prefer moist soil. Be sure to check hardy garden orchid info for the type you’re growing. Amend the soil with well-composted material prior to planting, if needed.

Limit fertilization when growing this specimen.

Deadhead spent blooms so that energy is directed to the roots for next year’s blooms.