Orchid Repotting: When And How To Repot An Orchid Plant 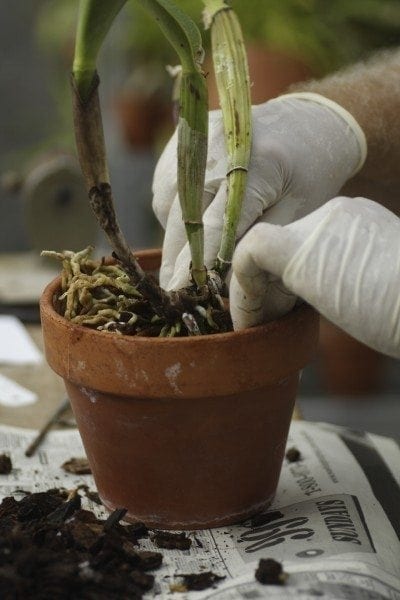 Orchids were once the domain of specialty hobbyists with greenhouses, but they’re becoming more common in the average gardener’s home. They’re relatively easy to grow as long as you find the right conditions, but almost every grower gets nervous at the thought of repotting an orchid.

Orchids don’t grow like other houseplants; instead of putting out roots in a pot of soil, they exist in a container of loose materials such as bark, charcoal, and moss. Repotting can be the most finicky time for orchid plants because they are susceptible to disease and you’ll be exposing the roots, but with a little care, you can be repotting orchid plants with great results.

When to repot orchids is important in order to ensure success. There are two major ways to tell if your orchid needs repotting. First, if it’s growing out of its container, you may see white roots popping out between the spaces in the container. This is a sure sign that your plant has outgrown its home.

The other reason for orchid repotting is when the potting medium begins to break down. Orchids grow in a very chunky medium, and when it breaks down into smaller bits, it won’t drain as well. Change out the medium to give your orchids’ roots the air they need.

The other half of knowing when to repot orchids is choosing the time of year that’s best for the plant. If you have a cattelya or other orchid that produces pseudobulbs, repot it right after flowering and before the roots begin to grow.

For all other orchids, you can repot them at any time, although disturbing the plant when it’s in flower is usually not a good idea.

How to Repot an Orchid

Choose a new pot that’s an inch or two (2.5-5 cm.) larger than the one before. Specialized orchid planters have holes all around the surface to increase the air circulation in the roots, but you can use a traditional terra cotta pot as well.

Put your orchid potting mix into a large bowl and cover it with boiling water. Allow the water to cool to room temperature, then drain the potting mix.

One of the most important things to learn about how to repot an orchid is that they are very sensitive when it comes to bacteria and germs. Make a solution of 1/2 cup (120 ml.) of household bleach and 1 gallon (4 L.) of water. Soak the planter in this, as well as any tools you use. Wash your hands before you proceed.

Gently pull the pot away from the plant and wash off the roots. Use sharp scissors to cut off any brown or rotting roots. Fill the new planter with the soaked potting medium and place the plant so that the base is right at the top of the medium. Use a chopstick to help push bits of planting medium in between the roots. Keep the orchid misted for at least a week until the new roots begin to appear.

Repotting an orchid doesn’t have to be intimidating. Just pay attention to the timing and ensure proper growing conditions so your beloved plant will thrive.