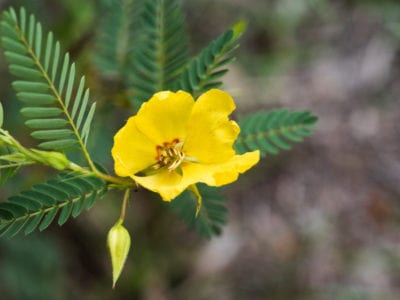 Also known as sleeping plant, partridge pea (Chamaecrista fasciculata) is a North American native that grows on prairies, riverbanks, meadows, open woodlands, and sandy savannahs across much of the Eastern half of the United States. A member of the legume family, partridge pea is a critical source of nutrition for quail, ring-necked pheasant, prairie chickens, and other grassland birds.

Partridge peas in gardens provide attractive, bluish-green foliage and bright yellow, nectar-rich blooms that attract bees, songbirds, and several species of butterflies. If this snippet of information has piqued your interest, read on to learn more about partridge pea plants.

This drought-tolerant plant is a great groundcover and is often used for erosion control. Although partridge pea is an annual, it reseeds itself from year to year and can become somewhat aggressive.

Partridge pea is also known as a sensitive plant due to the delicate, feathery leaves that fold up when you brush them with your fingers.

Deadhead wilted flowers regularly to promote continued blooming. Removing spent blooms also keeps the plant in check and prevents rampant reseeding. You can also mow over the top of plants to control weeds and remove wilted blooms. No fertilizer is necessary.