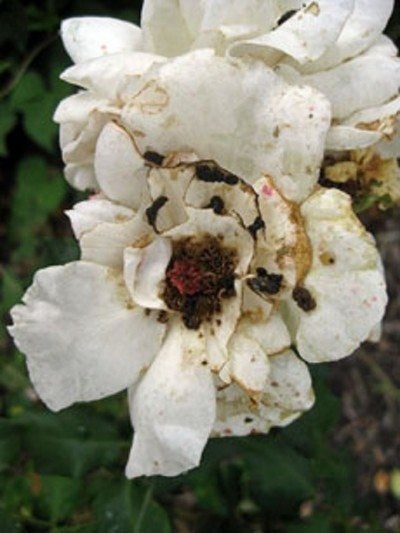 Budworms (aka: tobacco budworms) are nasty pests in the rose garden as they destroy the rose buds and blooms on the rosebushes. Many rose gardeners who find budworms on their roses wonder about how to get rid of budworms. Let’s learn more about the budworm caterpillar and tips for budworm control.

Budworms have the audacity to leave behind a lot of black sticky goo that looks somewhat like mouse poo. The budworms are actually caterpillars that seem to have a bit of a “champagne” taste, as they like to attack the blooms on roses, snapdragons, geraniums, petunias, and some other flowering plants.

Once the blooms are all gone, budworms will lower their standards a bit and start munching on the leaves or foliage of the plant under attack.

The damage that they do to rose blooms is evident and you will notice the black globs they leave behind as well. Budworms will leave somewhat round to oblong holes in the petals of the blooms on your roses and other flowers as they destroy them. They will make a huge mess of your pretty blooms in short order.

Left untreated they will ruin every bloom in your rose bed or garden quickly as they have an amazing appetite, then move on to the foliage.

Budworms are also very clever pests, as they hide themselves well during the daylight hours to keep from becoming food for the birds. Then under the cloak of night’s darkness they come forth to do their dirty deeds! 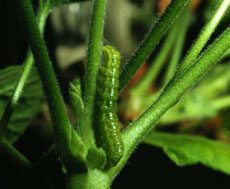 Budworms are very small and, thus, can escape even the most watchful of gardener’s eyes. Even at maturity they may be as small as ½ inch (1 cm.) in length, although I have heard of some that can get as big as 2 inches (5 cm.) long.

They are naturally greenish to translucent, which makes them hard to detect as well. Although, they can and often do take on the color of the bloom or foliage they are munching on.

How to Get Rid of Budworms

If you are unfortunate enough to have to deal with budworms, there are a few good methods for budworm control.

The use of an insecticide called Sevin or a product called BioNeem by Safer or Safer BT Caterpillar Control are very effective at gaining control over these pests. Other neem oil or Bt products will work as well for budworm control.

If you do use the Sevin to gain control, it would be a good idea to pick up a miticide as well, as Sevin kills the natural predators of the spider mite and might open your roses to an attack by spider mites.

Since the rosebushes are a bit stressed by the budworms attack, keep an eye on them for other disease attacks, as in their stressed state they are far more susceptible to such attacks. Treating any problem early is far easier to control than one that has gained a good hold on its territory.

It is extremely important to keep a close eye on your plants even after having gotten apparent control of the initial situation. The mature budworm will fall to the ground and burrow down into the soil where it pupates for about three weeks and emerges as a moth. (It is difficult to get all of them when spraying). The females lay eggs on blooms, which then hatch into the budworms all over again and another cycle has begun. Long hot summers favor their life cycles and there can be as many as seven such cycles in a growing season, thus the need to keep a close eye on things. Trying to time another spraying of insecticide approximately three to four weeks after controlling the first attack will keep your plants from suffering another major attack.