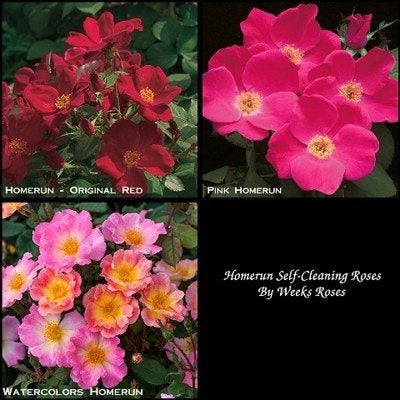 Image by Weeks Roses, with permission

Everyone has heard of the Knock Out line of roses, as they are a dandy rosebush. But there is another line of rosebushes that should be at least equal in popularity – Home Run roses, which come from the original Knock Out. Read on to learn more.

What are Home Run Roses?

Home Run is a nice bright red-blooming rosebush that was bred by none other than Mr. Tom Carruth, whose name is associated with many AARS (All-American Rose Selection) Award Winning roses. When Mr. Carruth saw Knock Out on the West Coast, he felt there was room for improvement. He felt the red color of the blooms could be brighter and that the disease resistance of Knockouts could be improved upon (like with powdery mildew and black spot issues). So the research team at Weeks Roses took Knock Out and brought in the Baby Love rosebush bloodline.

The other thing that bringing the Baby Love bloodline in did was to create a rosebush that is constantly in flower. Home Run may not be totally packed with blooms but is constantly blooming and has a nice, mild apple fragrance. The foliage of Home Run is richly colored and provides a wonderful backdrop for the blooms too.

When it came time to see which young roses would actually make it out into the test fields, Tom Carruth stated that only three sisters were up to the task. One of them was pink, one light pink and one red. He played a hunch on the red one and it played out wonderfully. The Weeks Home Run line of roses turned out to be hardy, self-cleaning shrub roses having brighter red blooms and greater disease resistance.

In addition to better resistance to powdery mildew and black spot fungus, it has shown a higher level of resistance to downy mildew. Home Run is said to be a “Grand Slam” both in the landscape and in containers, and is heat tolerant as well as cold hardy. Most roses take 10 years to actually make into the market and, in turn, our gardens. Home Run only took 7 years!

Other Self-Cleaning Shrub Roses in the Series

Another in the line is Pink Home Run, coming from a mutated sport of the original red Home Run rose. This variety has a wonderful “sassy pink” color and carries the same disease resistance and other attributes of the original Home Run. Along with its eye-catching, head-turning pink color, it also has a nice apple fragrance and performs very well in the landscape or containers around the porch, patio, or deck.

New to the market and not officially introduced until 2016 is the stunningly beautiful Watercolors Home Run shrub rose. The mesmerizing blooms are clear pink with bold, yellow centers. When fully in bloom, heads of passersby will turn, traffic will nearly stop and comments of adoration and appreciation are sure to follow. It boasts the same disease resistance and low maintenance as this line, as well as the same fine performance in containers and landscapes. The overall bush shape is said to be tidy so that not much, if any, shaping is needed.

As these are still quite new to the industry, little is known in regards to gardening with Home Run roses. That being said, Home Run rose care should be relatively similar to that of any rose variety.

I recommend feeding the Home Run line of rosebushes with a good, organic-based rose food just with other roses. Keep them watered and pick planting locations with good sun exposure for optimum performance.

When I asked Mr. Carruth about deadheading (removing old blooms) Home Run roses, he stated that he recommends not deadheading them at all. The reason is that the new blooms come in so high upon the same bloom heads that this will actually remove new blooms that are forming. If one must remove the old petals, it is best to pinch them off directly at the base of the old bloom instead.

The Home Run line of rosebushes should be pruned in early spring to remove any dead, broken, or damaged canes. This is also a good time to do some “shape pruning” as needed. A general thinning is good for any rosebush to allow good airflow keep diseases away. Even though these outstanding rosebushes are low maintenance that does not mean no maintenance. Just as with other rosebush, good care is important. Just heed the recommendation of Mr. Carruth to resist any urges to deadhead and you will be happy you did!

With adequate care, the Home Run Series of rosebushes will delight you with their continual blooms in the rose bed, landscape, or container garden!