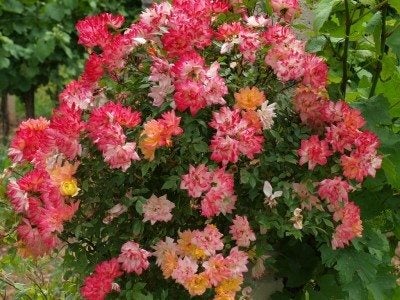 Downy mildew on roses, which is also known as Peronospora sparsa, is a problem for many rose gardeners. Roses affected by rose downy mildew will lose beauty and stamina.

Symptoms of Downy Mildew on Roses

Initial leaf symptoms of roses with downy mildew are light green to yellow spots, called “oil spots” because they may appear greasy. Downy mildew on roses seems to attack the new foliage growth first and works its way down the rose bush. You may also see a reddening of the stem or sepals on the rose bush.

Rose downy mildew can be a very tough customer to get rid of once it gets started. When using fungicidal sprays to gain control, it is best to alternate fungicides used at each spraying using a fungicide with a different mode of action. Fungicides containing Metalaxyl seem to provide some control.

The Oospores of rose downy mildew can be either wind or water borne, thus infection of other rose bushes in the same rose bed is highly likely. Spraying all of your rose bushes from first onset of the infection and continuing for at least four to five sprayings seven to ten days apart should stop any spreading of the downy mildew. Here too, a preventative fungicidal spraying program carries much value.

Downy mildew on roses will overwinter in rose bushes. For this tough customer, the best cure is truly prevention. A good spring cleanup of all old foliage is very important in the prevention of this disease.

With downy mildew on rose bushes and any rose disease, maintaining good air flow through and around your rose bushes will help prevent this disease. Do not let them become so overgrown or tight with foliage. New cane growth throughout the center of the rose bush can become its worst enemy in the fight against diseases. Indeed, a rose bush with full foliage and loaded up with blooms is a pure delight to behold; however, you can get this same beautiful look with just a bit of thinning out that will allow the air movement needed.