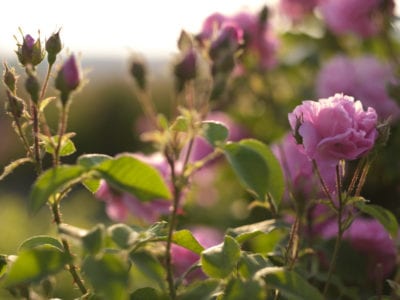 Leaves falling off of rose bushes can be caused by different things, some natural and some due to fungal attacks. When a rose is dropping its leaves, you can be sure there is something wrong with your roses that needs to be addressed. Let’s look at a few reasons why rose leaves might fall off.

An attack of black spot fungus can cause the leaves to fall off of our rose bushes. First, you will notice tiny black spots on some of the leaves, which look a lot like fly specks or fly poo, but they certainly are not. If left untreated, the black spot fungus will quickly spread over the foliage of the infected rose bush. The black spots will get bigger, leaves turn yellow with sometimes brownish edges and fall off.

The best thing to do is to spray our roses preventatively for fungal attacks. Once you notice an attack of any fungus, spraying is of utmost importance. Keep in mind, though, that once the black spots are there, they will remain even once the fungus is dead. The new foliage generated will be free from the black spot fungus if our spraying did its job and truly killed the fungus.

Heat Causes a Rose to Drop Its Leaves

In the midst of a string of intensely hot days, some rose bushes will become very stressed, even with our best attempt to keep them comfortable and well-watered. These rose bushes will start dropping leaves for no apparent reason and cause quite a bit of alarm for the rose loving gardener. It is actually the rose bush trying to create better cooling airflow for itself. By dropping some of its foliage, the rose bush increases the open area for air to circulate around its canes in an effort to cool down.

Sometimes all that foliage is just way more than the rose bush can possibly support and keep healthy under severe heat stress periods. So, the rose bush starts dumping foliage in an effort to keep only that foliage which the root system can adequately support with moisture, plus just enough to provide what the roots need to keep the overall bush alive and as healthy as it can be.

To help stop some of this foliage loss, you can make some heat shades to help block a few hours of those most intense times of the sun’s heat upon the rose bushes. Once the day is winding down and the intense sunlight and heat are as well, you can rinse down the foliage of each rose bush at the same time, giving them a refreshing drink of water. This will help cool down the entire bush as well as helping keep the pores on the leaves open and performing as well as they can.

Lack of Water as a Reason for Rose Bushes Losing Leaves

Another reason for rose bushes dropping their leaves is the lack of water. If the rose bush does not have enough water to support all the foliage, it drops foliage in an effort to preserve itself. The leaves and root system work together to keep the overall rose bush healthy. If either one, the top or the bottom part of the rose bush, do not get what they need to perform at the best levels needed for the overall health and wellbeing of the rose bush, changes must be made. In nature, many times, such changes are swift and easily noticed. If you are paying attention to your rose bushes or other plants for that matter, you will see the warning signs of such things as a lack of water.

Keeping the rose bushes, shrubs, and other plants in the garden well-watered during times of intense heat may be a huge chore but is truly of utmost importance to a healthy and beautiful garden or rose bed. Feeding them is important as well, but a serious lack of water will have disastrous effects in the conditions of intense heat. Keep your gardens and rose beds well-watered, especially in those hot strings of days to allow them to be as beautiful as you truly want them to be.

It Can Be Normal for Leaves to Start Falling Off Roses

We notice on many rose bushes that the lower leaves seem to be turning yellow and falling off, causing serious concern. It is just the lower leaves, though, and no mid to upper-level leaves seem to be affected. Many rose bushes will get so full of mid and upper bush foliage that it shades the lower foliage. Thus, the lower foliage is not really needed to maintain the rose bush any longer and the bush starts dumping it. In this way, those rose bushes concerned are focusing on the growth that is producing more of the good for the overall bushes’ health and wellbeing.

Some rose bushes actually become what is called “leggy” due to this dropping of foliage. In order to hide those bare canes or “legs” of the rose bush, many folks will plant some low-growing and low-blooming plants to help beautify and cover that leggy look.