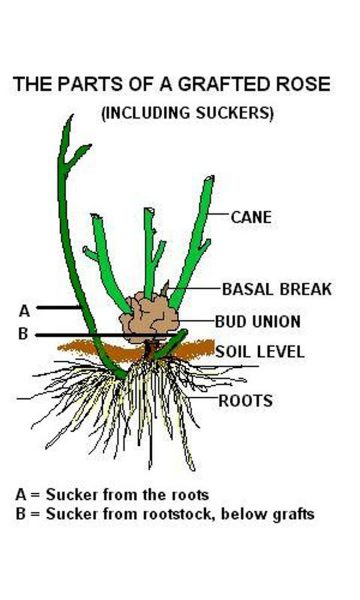 Image by Garden Know How, via Sue Curry

When you hear the word suckers, the first thing that comes to mind is most likely that sweet treat enjoyed from childhood. However, in the rose bed, suckers are ornery growths that spring out of the hardy rootstock of grafted rose bushes, just below the grafted knuckle union. Keep reading to learn more about sucker growth on roses.

What is a Sucker on a Rose Bush?

A grafted rose bush consists of the above-ground rose bush you desire and the below-ground rootstock. The above-ground portion is typically not hardy enough to survive in all climatic conditions. Thus, it is grafted (budded) onto another rose that is extremely hardy so that the overall rose bush is capable of surviving in most climates.

A truly great idea this was and is! Like all great ideas though, it seems there is at least one drawback that must be dealt with. The drawback, in this case, would be rose bush suckers. The hardy rootstock most often used in the United States is Dr. Huey. Japanese rose (R. multiflora) or Fortuniana rootstock in the southeastern United States are also popular. Any of these may get overzealous and decide not to support their new grafted companion, sending up vigorous growing canes, which we call “suckers.”

Sucker canes will, if left to grow, suck the majority of nutrients necessary for good growth and performance from their grafted counterparts, weakening the upper part of the bush – many times to the point that the upper portion dies. This is why removing rose suckers as they sprout is important.

Sucker canes will usually take on a totally different growth habit from the rest of the rose bush. They will grow tall and a bit wild, much like an untrained climbing rose. The leaves on the sucker canes will differ from the leaf structure and sometimes vary a bit in coloration too, with few to no leaves. Rose bush suckers typically will not set buds or bloom, at least in the first year of their growth.

If a sucker cane is suspected, take a closer look at it and follow the cane down to the base of the plant. Grafted roses will have a bit of a knuckle at the grafted union. If the cane is growing out of the top part of that knuckle union, it is likely the desired rose bush. If the cane is coming from below ground and underneath the knuckle union, however, it is most likely a true sucker cane and needs to be removed ASAP.

How to Get Rid of Rose Suckers

To remove rose suckers, follow them down as far as possible, moving some soil back to the point where it connects to the rootstock. Once you have found the point of connection, prune the sucker cane off as close to the rootstock as possible. Seal the area of the cut with either some Tree Wound Sealer, which is a tar-like product. Note: the spray-on sealers are not good enough for this. The cut can also be sealed with white multi-purpose Elmer’s Glue or the white Tacky Glue from craft stores. If you use the glue, let it dry well before moving the garden soil back in place.

Not pruning back far enough only allows them to grow right back. The rootstock may continue to send up more that need to be dealt with in the same manner. Some will continue to have this problem for the entire life of the rose.

If you have a rose bush that comes back from its winter nap but does not seem to have the same growth pattern it had previously, it is highly likely that the desired upper part of the grafted rose died and the hardy rootstock bush has taken over. In such cases, it is best to dig it out and plant another rose of the same kind that you had there or plant another one.