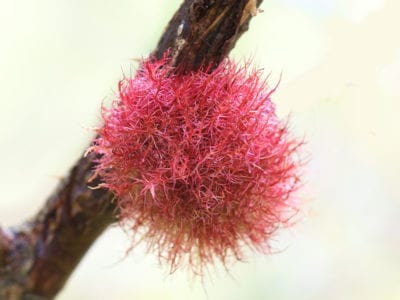 The first time I saw rose cane galls was when a long-time member of our local rose society called and asked me to come see some peculiar growths on a couple of his rose bush canes. Two of his older rose bushes had areas on several canes where round growths bulged out. The round growths had little spikes coming out that resembled new rose thorns forming.

We pruned out a few of the growths for me to investigate further. I placed one of the round growths on my work bench and slowly cut it open. Inside I found a smooth inner-walled chamber with two little white larvae. Once exposed to the light, the two larvae started doing the rapid larvae hula! Then all at once stopped and moved no more. Something about being exposed to the light and air seemed to cause their demise. What were these? Read on to learn more about cynipid wasps and roses.

Conducting further research, I found out that these peculiar growths, known as galls, are caused by a tiny insect known as the cynipid wasp. Adult wasps are 1/8″ to 1/4″ (3 to 6 mm.) long. The males are black and the females are reddish-brown in color. The front segment (mesosoma) is short and strongly arched, giving them a hunchback appearance.

In spring, the female cynipid wasp deposits eggs in a leaf bud at the point where the leaf structures attach to the stem or cane of the rose bush. The eggs hatch in 10 to 15 days and the larvae begin feeding on the cane tissue. The host rose bush responds to this intrusion by producing a dense layer of stem cells around the larvae. This gall growth is first noticeable when it becomes about twice as wide as the rose cane it is on. At this early phase, each larva is small and does not eat much at all.

About mid-June, the larva enters its maturation phase and grows rapidly, consuming all of the nutritive tissue cells in its chamber within the gall. The galls usually reach their maximum size in late June to early July. By mid-August the larvae stop eating and enter what is called the pre-pupa stage, at which time they will over-winter.

The galls are most often above the level of the snow and the larva inside is subjected to the extremes of temperature but avoids freezing by producing and accumulating glycerol, kind of adding anti-freeze to vehicle radiators during cold winter days.

In early spring, the larva enters the white pupa stage. When the temperature reaches 54°F. (12 C.), the pupa darkens. During spring or summer, when the buds of the host plant are growing, the now adult wasp chews an exit tunnel from its chamber/gall and flies off in search of a mate. These adult wasps live a mere 5 to 12 days and do not feed.

Cynipid wasps appear to prefer the older rose bushes such as Rosa woodsii var. woodsii and the Rugosa rose (Rosa rugosa) cultivars. When young, the rose cane galls are green and the spines on the outside of it are soft. Once mature, the galls become reddish-brown or purple, hard and woody. Galls at this stage are quite firmly attached to the rose canes and cannot be removed without using pruners.

In some areas, the galls that form on rose bushes appear to be covered with mossy looking growth rather than the spiny/thorny growth on the outside of the gall. This outer growth is believed to be a way to camouflage the galls, thus hiding them from predators.

To help with eliminating galls on roses, they can be pruned out and destroyed so that the number of wasps is lessened each year. Cynipid wasps only create one generation per year, so may not be that big a bother to your rose beds and, in fact, interesting to watch.

As a science project for kids, one could prune out the galls once subjected to cold winter temps, place them in a jar and await the emergence of the tiny wasps.