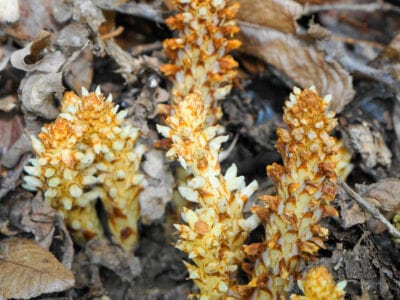 Bear cone (Conopholis americana) is also known as Cancer Root. It’s a strange and fascinating little plant that looks like a pinecone, produces no chlorophyll of its own, and lives mostly underground as a parasite on the roots of oak trees, seemingly without harming them. It’s also known to have medicinal properties. Keep reading to learn more about the bear cone plant.

The bear cone plant has an unusual life cycle. Its seeds sink into the ground near a tree in the red oak family. Unlike other plants, which immediately send up leaves to collect chlorophyll, the bear cone seed’s first order of business is to send down roots. These roots travel down until they make contact with the oak’s roots and they latch on.

It is from these roots that the bear cone gathers all its nutrients. For four years, the bear cone remains underground, living off of its host plant. In the spring of the fourth year, it emerges, sending up a thick white stalk covered in brown scales, which can reach a foot (30 cm.) in height.

As summer wears on, the scales pull back and fall off, revealing tubular white flowers. The bear cone flower is pollinated by flies and bees and eventually produces a round white seed that falls to the ground to begin the process again. The parent bear cone will survive as a perennial for as many as six more years.

Bear cone is edible and it has a long history of medicinal use as an astringent. It supposedly gets its name from Native Americans’ use of it to treat the symptoms of menopause. It has been used to treat hemorrhages and headaches as well as bleeding of the bowel and uterus.

The stalk can also be dried and brewed into a tea.